This week I thought I’d review a book written in French. I don’t speak French beyond blustering level, so armed with google translate I tentatively opened my copy of Jane, le Renard & Moi (Jane, the Fox and me – see, it’s all flooding back now). 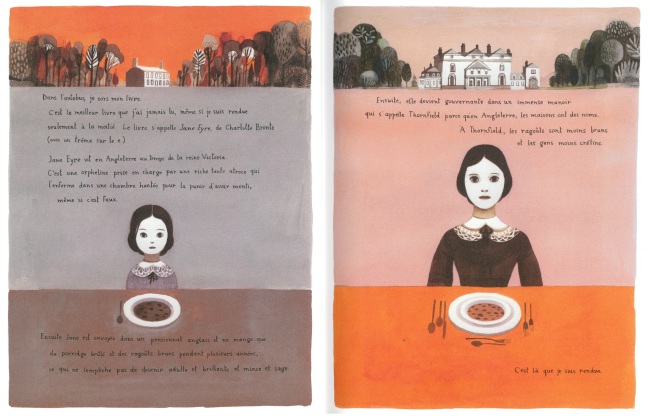 I needn’t have worried really. Although I didn’t actually understand large chunks of Fanny Britt’s text, the illustrations of Isabelle Arsenault told the story with such flourish that I don’t think it mattered. So forgive me if this little précis isn’t entirely accurate. 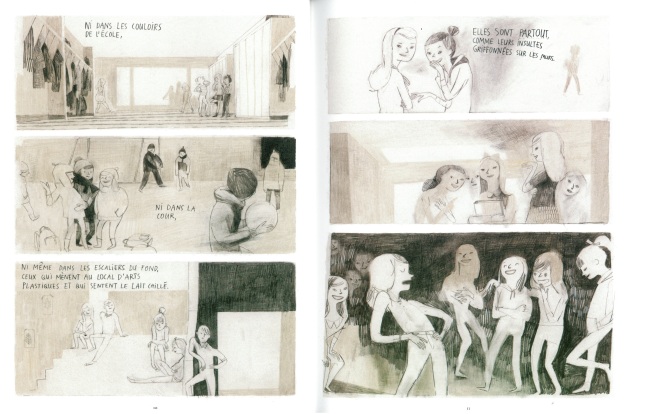 Helene is a French Canadian high school kid. Shunned by her former friends she attempts to disappear into the background whenever possible to avoid taunts about her clothes, weight and body odour. Her only solace is a copy of Jane Eyre, which transports her out of the dull sepia tones of her daily existence and into the terracotta hued world of Thornfield, Jane and Mr Rochester.

Helene’s worst fears are realised on a school nature retreat where her friendlessness is cruelly exposed as she is put in a cabin with the other outcasts. But it’s here at her lowest ebb that some of the vivid colour from her fantasy world begins to seep into her life, when she spots a fox in the forest, finally making a connection with another living being, one that pre-empts a real human friendship.

It’s a very familiar story, and one that reminded me of the heartbreaking American classic The Hundred Dresses by Eleanor Estes and Louis Slobodkin. Helene’s obsession with the crinoline dress her mum is painstakingly making her mirrors the heroine of The Hundred Dresses, who is bullied for her meagre wardrobe, and the clothes of her fertile imagination.

Arsenault’s illustrations are also in keeping with the shimmering, sparingly colourful style of Slobodkin. I’d be interested to know if the authors had this book in mind, or whether it’s just a case of one of those classic tales that keeps returning. 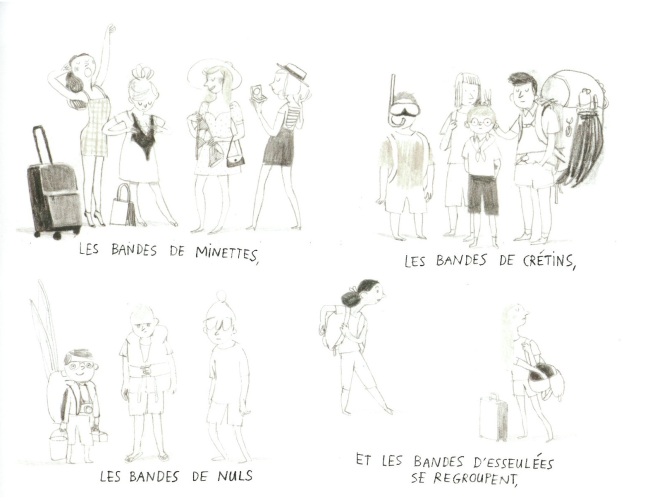 There was an interesting article recently about the decline of French children’s books. As I’ve pointed out I’m hardly the right person to be judging French literature, but the piece missed out one crucial component of French (and Belgian) books for kids – Bande dessinée – or comic books, which we know mostly through Asterix and Tintin, which are only part of a rich literary scene. Jane, Le Renard et Moi is a fabulous example of this, and one that shows up one the paucity of non-superhero based comic books for children written in English. 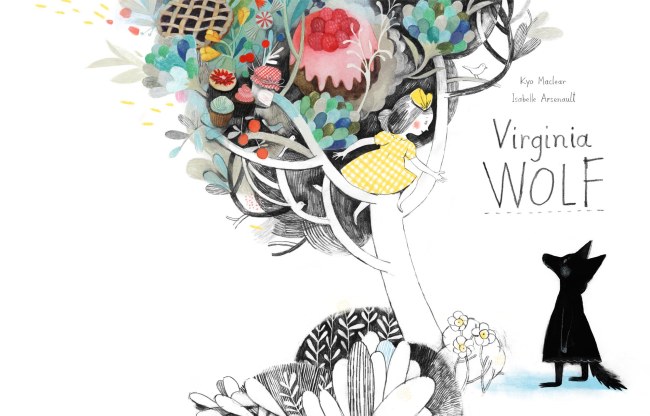 Isabelle Arsenault has also produced several books for younger children, which curiously also have an Eng. Lit connection. Virginia Wolf, written by Kyo Maclear (in English) for younger readers, is a treatment of another perennial theme, the bad mood.

One morning Virginia wakes up, in her bedroom (based on the real Virginia Woolf’s sleeping quarters), feeling ‘woolfish’ – a state that comes complete with pointy ears and a bushy tail. Virginia doesn’t so much get out of bed the wrong side as kick the bed, the entire contents of her room, sister and all into an Alice like spiral of gloom.

But unlike poor Helene, Virginia has an understanding sister to comfort her. Vanessa is also cast in silhouette for much of the story, but we still see the concern written on her face in simple blue pencil lines. The bond between the pair is quite beautifully captured – to the extent that it made me sad that my own daughter didn’t have a sister like Vanessa to confide in. 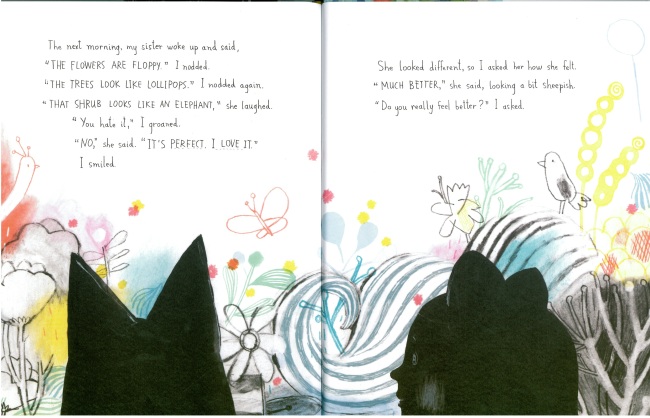 Like her namesake Vanessa Bell, the narrator is an artist, and from her paintbrush springs Bloomsberry, a place Virginia has described to her (in capital letters) as, ‘A PERFECT PLACE. A PLACE WITH FROSTED CAKES AND BEAUTIFUL FLOWERS AND EXCELLENT TREES TO CLIMB AND ABSOLUTELY NO DOLDRUMS.’

Bloomsberry is of course a fantastic excuse for Arsenault to just let rip, the colour exploding off the page. ‘We made turquoise birds and purple butterflies out of colored paper. And Virginia told a story about a gray-shelled snail that passed along the earth and reached the top of a mountain without realizing it.’ 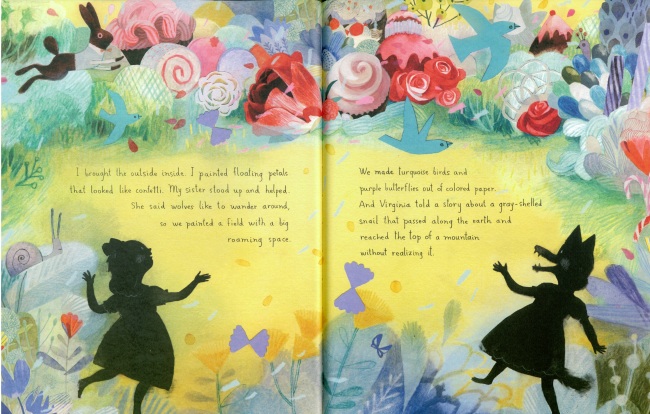 In these final pages Virginia Wolf is a celebration of the imaginative collaboration between these two sisters, one that beautifully mirrors the relationship between the author and the illustrator, and the perfect worlds that the two can create when they come together.

Come September I’ll also be able to fully appreciate Arsenault’s collaboration with Fanny Britt when Jane, the Fox and Me is published in English.

This is an odd book. Not quite sure what to make of it. Hoping it veers into stranger territory in the second half (or "side" as David Mitchell would describe it). The yellow covet is jolly nice though. #bookstagram #utopiaavenue #yellow #bookcover #lazysunday
Think these might be the nicest colour combinations of the various Puffin editions of the Chronicles of Narnia illustrated by Pauline Baynes. Luckily you can buy them from my #etsy shop today! Link in bio 🔗
The original illustration of the cut out ‘cereal’ packet garden in Joan Aiken's The Serial Garden illustrated by Pat Marriott.
Red Tag Comes Back. Before creating the beloved amphibians Frog and Toad, Arnold Lobel illustrated salmon for the I Can Read Science range.