First, in the age old manner of bloggers, a humorous reminiscence to get us onto a thorny subject: Nearly a seven years ago we moved to the picturesque town of Stepford, just outside a small Georgian city in the west of England. It's a lovely, peaceful old place, but having just left an altogether edgier, but brilliantly multicultural locale on the east side of Bristol we were in for a culture shock.

We started doing the sorts of things you might expect to do in such a place: watching rubber duck races, visiting National Trust properties and attending fetes. At one such event in the town hall we ate iced buns, passed by stalls laden with unaccountably fluffy ladies scarves and scrutinised the many watercolours of the place we already lived. Then, reaching the back of the hall, we were assaulted by a scrum of knitted toys kitted out in bow ties, red jackets and stripy trousers.

Hundreds of red lipped, black faced Golliwogs leered out at us; those grotesque racist dollies that had been part of the childhoods of millions of children (mine included) until shamefully late in the 20th century. I'm not just talking a lone curiosity, mistakenly provided by a dim witted OAP. Not even a table full. This was practically a whole aisle. What was this weird racist place we'd moved to? Carole Thatcher would have loved it. And so, according to his critics would have comic book grandee Alan Moore.

In 2007, Moore and Kevin O'Neill, his 'south London Irish racist collaborator' (Moore's words), published The Black Dossier, the third volume in their comic book series 'The League of Extraordinary Gentlemen'. Spanning an alternative 20th Century the League are a group of government agents based on characters from Victorian genre fiction. Alumni include Mina Harker, the Invisible Man and Doctor Jekyll and in The Black Dossier the league square up to a very unreconstructed spy called 'Jimmy Bond'. But they're aided by an even more controversial figure.

Galley-Wag is a new version of the Golliwogg character from Florence Upton's enormously popular picture book series from the beginning of the 20th Century. But, as Moore is at pains to point out, this is not the same thing as the later 'Golliwog' that people born before the 1990s will remember, 'Here we had a character which in its day was positive, bold, innovative, and the creation of a typically overlooked woman creator who had quite possibly wished to situate an admirable and loveable black figure in the imaginations of the white Victorian children who comprised her readership.'

Unsurprisingly there were many who took issue with any inclusion of this 'racist slur toy'. And since the publication of the Black Dossier Moore has continued to be asked questions about it – something that has contributed to his desire to never to do another interview.

'Then all look round, as well they may

To see a horrid sight!

They scatter in their fright.'

No this isn't an Alan Moore poem about Grant Morrison, but how Florence and Berth Upton introduces the original 'Golliwogg' to the world. You might reasonably infer that The Adventures of Two Dutch Dolls and a Golliwogg from 1895 was a product of some hateful racists. Except the Uptons went on to write a further twelve books about Golliwogg and his friends, in which he is always the hero, stout of heart and with a buccaneering spirit. 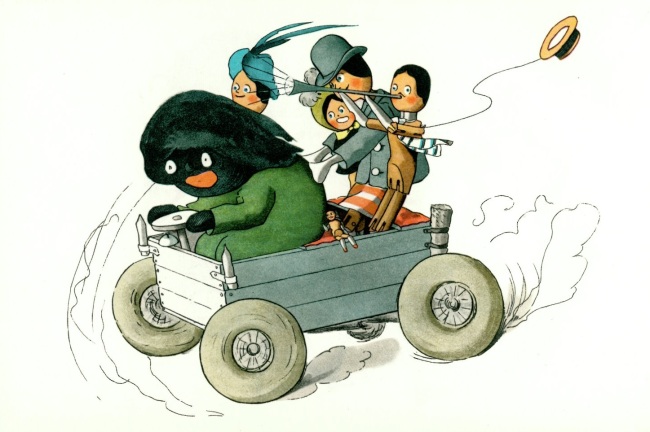 Florence Upton explained that the Golliwogg was a much loved family toy bought when she was a child in America, and rediscovered in later life after she had moved to the UK and was struggling with her first draft of 'The Dutch Dolls'. Of course there's no escaping the fact that the doll was based on the racist tradition of the performing minstrels – white actors with blacked up faces, rouged lips and 'fright wigs'. But with that first description, 'the blackest gnome', I don't think she is making an intentionally racist slur, rather acknowledging the essential wrongness of the doll's appearance. 'Oh! We knew he was ugly!' says Upton. 'But his words and deeds… just seemed the genuine expression of his personality as I see it, and no one believes in his good humour, his gentleness, his genuineness more than his so-called creator'.

I've only been able to read a couple of the books, as they are (unsurprisingly) long out of print. But I think I got a pretty good impression from 'Two Dutch Dolls' and 'The Auto-Go Kart'. In the company of his peg lady friends, Golliwogg travels the world in search of fun and adventure, getting into many scrapes along the way. Another interpretation might be of a black monster on the run with a group of white, often unclothed women. It's a premise that Quentin Tarantino might have some controversial fun with. But here it's served up to children, with nary a peep of outrage. In fact the Golliwogg went on to become one of the most popular children's characters of the 20th century.

And had he just been judged on the Uptons' books, Golliwogg's fate might have been different; an uncomfortable relic of our shameful past, but at least a well intentioned one. But unfortunately the Uptons were a family of bohemian artists, and didn't really concern themselves with protecting or copywriting their beloved creation. Instead his image was appropriated by everyone from toy manufacturers to jam makers to racist children's book authors. Something got very badly lost in translation…

Having happily avoided her all my life, a few years ago I got sucked into the troubling world of Enid Blyton via a terrible CG animation of Noddy that my children unaccountably loved. In one particular episode a 'naughty goblin' lures Noddy into the forest outside Toytown where he and his goblin friends carjack the nodding boy. I remember thinking this seemed a little wrong thought at the time. Then I discovered that the goblins were in fact a later addition. In the original story, taken from Here Comes Noddy Again (1951) the leering baddies are in fact Golliwogs – they'd lost a letter 'g' by this point but gained a whole lot of malice.

In Blyton's hands the Golliwogs become leering, scheming and abusive. The scene where Noddy is ambushed and stripped of his clothes is downright disturbing. And this wasn't a one off either, Golliwogs were Blyton regulars; house breaking in Hurrah for Mary Mouse and given their very own title, in which we finally learn their names – Golly, Woggy and Nigger. And their favourite song? 'Ten Little Nigger Boys' of course, that charming ditty that lists the gruesome deaths of a group of black children. Apologists will disagree but this is explicitly racist stuff.

Not that Blyton was the only one at it, she'd taken on a character that had retained its original disturbing look and gained a warped character to match. Which brings us back to his latest incarnation in The League of Extraordinary Gentlemen. Were Moore and O'Neill right to revive the Golliwogg? I think so. They achieve their stated intention of returning the heroic qualities of Upton's character when he and the dolls help the League escape the racist, sadistic and misogynist 'Jimmy Bond'. And after all, aren't we still very much in love with James Bond and largely unquestioning of his dubious past? It seems right that this much maligned character who was warped into a racist grotesque should be given another chance to stand up for himself. 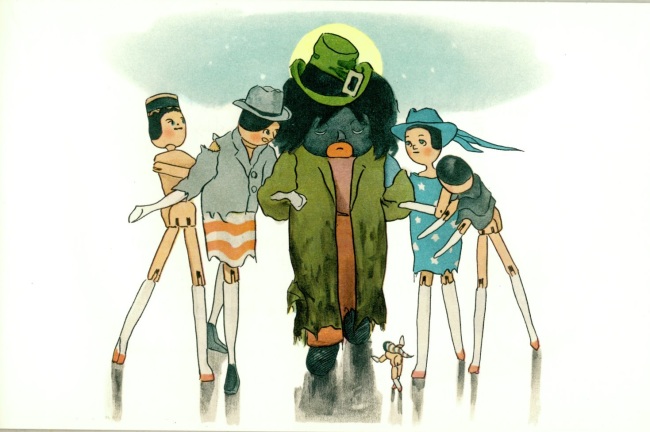 3 thoughts on “The Black Dossier – Return of the ‘Golliwogg’”