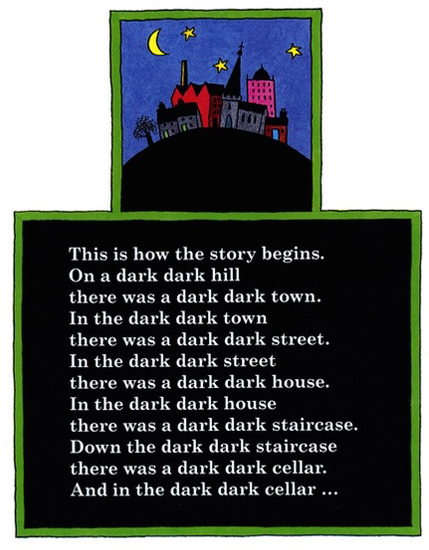 Apart from the numerous times I climbed through the toilet window, slipped out the school gate, crossed the road, and broke back into my own home, these lines are probably the happiest memory I have from my first years of Primary school. 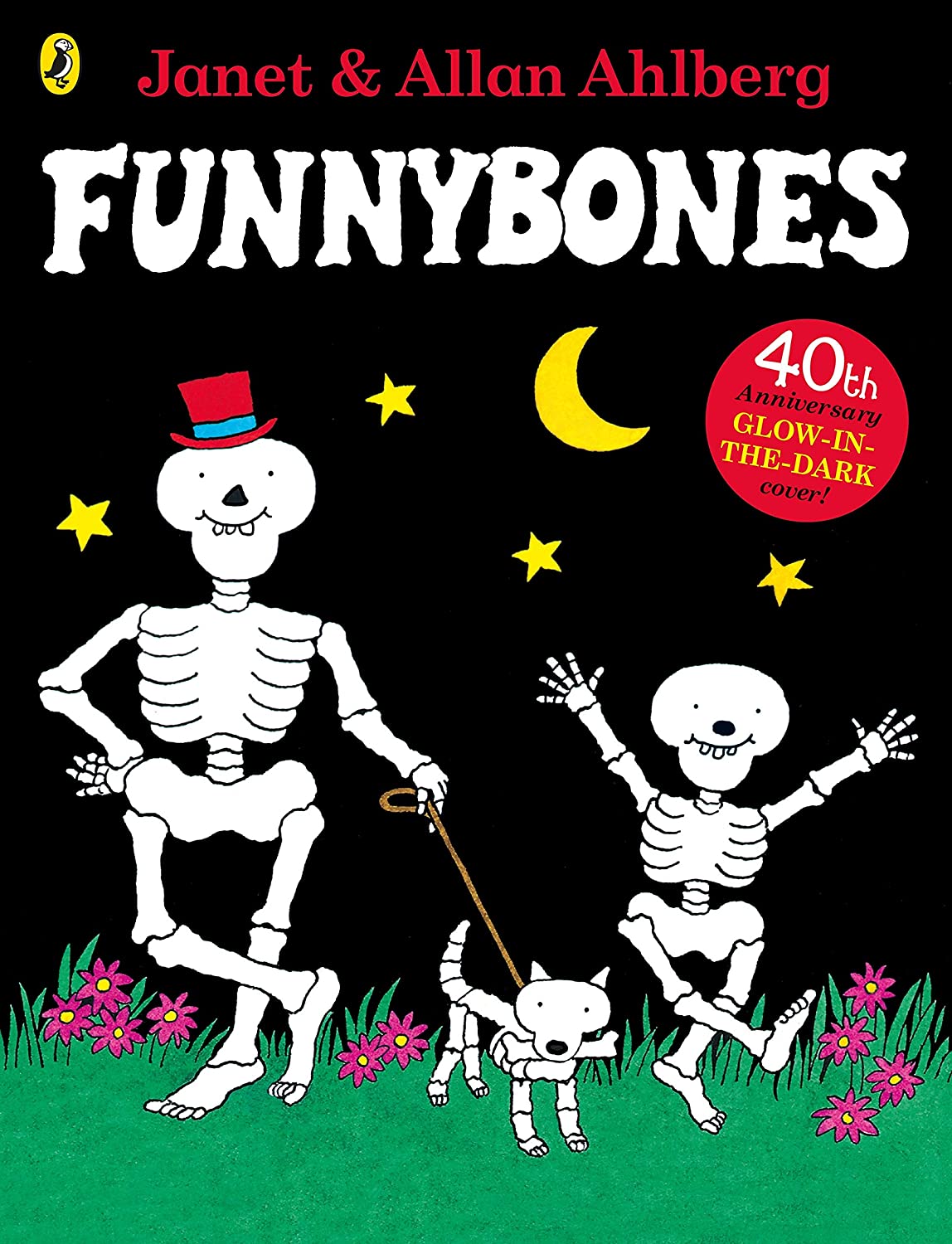 40 years ago, Janet and Allan Ahlberg’s Funnybones was the book that first introduced me to the delights of spooky stories. I can still remember my long suffering teacher, Miss Janssen reading those opening lines with the required amount of dread.

Following hot on its heels was Jan Pieńkowski’s pop-up classic Haunted House, a book that still stands as the ultimate artistic expression of this novelty format. Combining jump scares and a sense of creeping dread it draws on the horror genre at a level that is perfectly pitched for very young readers.

Pieńkowski entices you from the front cover, a cheeky tentacle hanging out of the letterbox and invitation to ‘Let yourself in’. 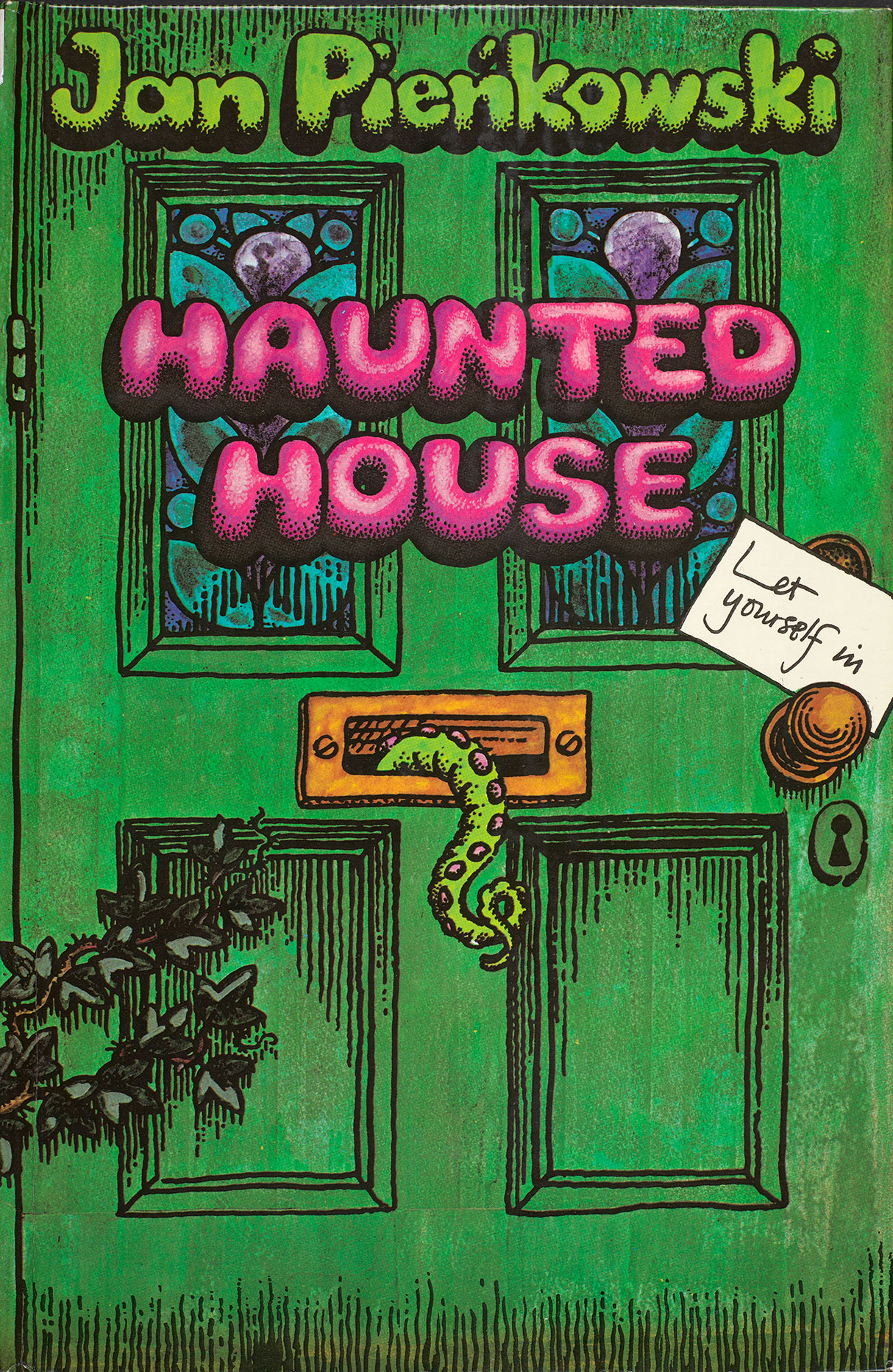 Once in the hallway we are led through a series of B-movie horror set-pieces: past the picture with the moving eyes; the gorilla popping out from behind the sofa; an alien crashing through the bathroom wall; the skeleton leaping out of the closet…

It’s all undercut with an ironic conversation between two mice, moaning about their aches and pains, before approaching the terrible, unseen conclusion.

Shirley Hughes was a constant comfort to me then, and she isn’t really someone you’d normally connect with spooky stories. She’s best known for showing the world through the eyes of very young children. Their dramas are the everyday: starting school, losing a soft toy, or getting locked inside the house with the grown-ups on the other side.

‘It’s Too Frightening For Me’ is a story about two brothers unable to resist poking around a dark house. It provides the scares, but retains Shirley Hughes’ wonderful empathy for her characters. You get a real sense of the boys’ fear as they try to put on a brave face, pushing themselves that bit further each time they return to the house.

The scene where Arthur looks for his big brother in the shadowy hallways is particularly effective.

They find themselves embroiled in the lives of the unusual residents and wind up foiling a dastardly plot, with an unmasking – or rather unwigging – worthy of Scooby Doo. There’s a great sight gag in the last pages showing the offending hairpiece weaved into the tangle of vines outside the house by nesting birds. 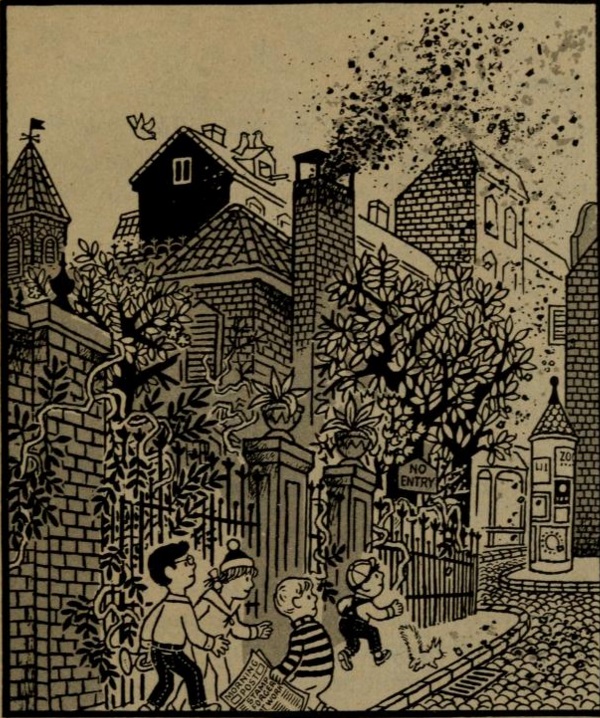 Mysteries also abound in ‘The Adventures of the Black Hand Gang’ by H.J. Press. There’s nothing horrific to be found here, but it does have a mystery on every page for the reader to solve by studying the intricate illustrations.

The Black Hand Gang are a group of children (and a squirrel) running a detective agency from their bedroom. The first case sees them exploring a mysterious dark house, and uncovering a forgery business operating out of the basement.

H.J. Press was a German writer and illustrator, and I think it was the moody european settings that captured my imagination as much as the puzzles. It’s a bit like Where’s Wally realised by Hergé.

‘There was big skeleton, a little skeleton and a dog skeleton.’

Buy It’s too Frightening for Me! from Bookshop.org

3 thoughts on “A Dark Dark House”