The escapades of Astrid Lindgren’s Bullerby children come with an added layer of muted pleasure thanks to the thick snow that covers everything in Noisy Village at this time of year. There are no strong girls, pet monkeys or outlandish sets of bunches to be found here, instead the sacred moments of the holiday season are treated with the total reverence they deserve and are as beautifully detailed as a perfectly decorated Scandinavian fir .

‘Christmas Eve morning… There were new red rag rugs on the floor; there was red and green and white curled tissue paper around the iron pole by the stove; there was a Christmas cloth on the big folding table; and all the copper kettles were polished. I was so happy that I gave mummy a big hug. Lasse and Bosse came rushing in right after me, and Lasse said that even his stomach felt Christmassy when he saw the rag rugs.’

‘The day after we baked the ginger snaps was fun too, for then we went to the forest to cut down the Christmas trees. We took out big sleigh, which we use for carrying the milk from Noisy Village to the dairy in the big village. Lasse and Bosse and I and Britta and Anna and Olle rode in the sleigh.

‘There was so much snow in the forest that we had to shake it out of the fir trees to see if they were pretty or not. We cut three big fir trees, one for each farm. And then we cut a tiny little tree for Grandfather to have in his room and another little one to give to Kristin, because she lives all alone in her red cottage in the woods.’

‘How surprised Kristin was when we came! Well, she probably pretended to be surprised because she knows that we come every year. Lasse unpacked everything an put it on the table and Kristin just shook her head and said, “My, my, it’s too much, it’s much too much!

‘I didn’t think it was too much, but it was a lot. A large piece of ham, a sausage, a round cheese, coffee, ginger snaps, candles, sweets and I don’t remember what else. We put the candles on Kristin’s tree and danced around it a little while.’

‘Then it was time to “dip in the pot.” Mummy gave us large slices of rye bread that Agda had baked and we dipped them in the broth that the ham had cooked in. My how good it was! Then there was nothing to do but WAIT! Lasse says that times like those hours in the afternoon of Christmas Eve, when you don’t do anything but wait and wait are the kind of things people get grey hairs from.’

‘Christmas is wonderful! It’s really too bad that it isn’t Christmas a little more often.’ 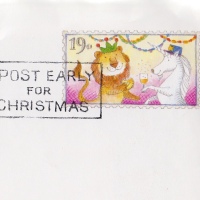