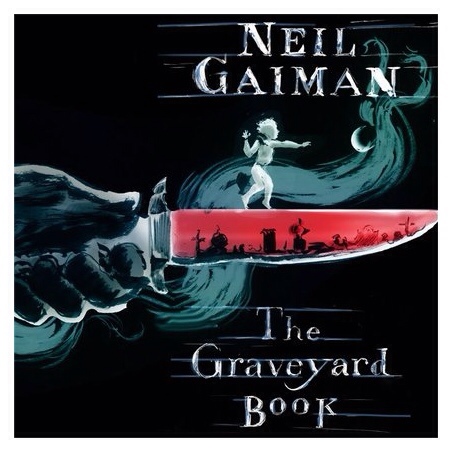 As I am currently obsessing over how to begin a story, I recently came back to one of my all time favourite opening chapters for inspiration. In How Nobody Came to the Graveyard, from The Graveyard Book, Neil Gaiman pulls off one of the most thrilling, disturbing opening sequences in children's literature.

Gaiman sets out his stall from the very first line, and follows it up with a deeply unsettling sequence in which we follow a knife wielding home invader as he makes his way through the house in which he has slain two parents and a child. Finally the 'man Jack' reaches the nursery where he comes to finish his work, but….

The point of view now shifts to the infant several minutes earlier, woken by the sound of the killer going about his business. The mood changes startlingly, leaving behind the claustrophobic Nosferatu like horror behind, for a world of adventure as seen through the eyes of an innocent. The boy climbs out of his cot (and his nappy, a little like Mickey in Maurice Sendak's In the Night Kitchen), heading into the night full of confidence.

'The child stepped out of the house, a little hesitantly. The fog wreathed around him like a long lost friend. And uncertainly at first, then with increasing speed and confidence the boy tottered up the hill.'

We've seen parents dispatched in all manner of ways in children's literature; drowned at sea (Pippi Longstocking), trampled by a rampaging rhino (James and the Giant Peach) and eaten by a tiger (The Jungle book). In fact Rudyard Kipling's story is the inspiration for The Graveyard Book, with Gaiman transposing the action from the jungle to the graveyard.

In chapter one we meet two Victorian ghosts, the Owens who stand in for Mother and Father Wolf from The Jungle Book. They discover the boy Bod, naked amongst the tomb stones and defend him against the predator – the deadly but fallible man Jack, standing in for the sneaky Shere Khan.

I finally understood this connection this weekend, whilst watching an open air screening of Disney's The Jungle Book. Disney are often accused of sugar coating difficult characters from children's literature. But along with the fragrant princesses they've always been rather brilliant at keeping their villains believably sinister and murderous. Seeing Shere Khan on the big screen, skulking and stalking with unsettling grace, I was hit with an image of the man Jack making his way up the staircase towards the infant's bed room.

Where Shere Khan, is a crippled outcast among tigers, the Man Jack similarly does not fit into the world of men. And like Khan, who rates himself as king of the jungle yet never manages to kill his young quarry, the man Jack is not quite as great a killer as he believes himself to be. But his profession is what defines him; the knife, like a tiger's claw becomes an extension of his body.

Neil Gaiman, speaking shortly after publication said that the prominence of the knife made quite a few people nervous.

'I’m already getting e-mails telling me that given the problems in England with knife crime, the idea of starting a book, “There was a hand in the darkness and it held a knife,” is wrong and I should have completely rethought my beginning. Nope, that’s the beginning. If you don’t get through three pages and actually understand that there is a man out there and he has a knife and he wants to kill the baby, then the idea that this child is going to spend sixteen years in a graveyard instead of going out into the world, it doesn’t make any sense. He has to be staying there because it’s safe.'

There are two wonderful illustrated versions of The Graveyard Book. The one I was familiar with was by Chris Riddell, who supplies single plates for each chapter. His portrait of the man Jack is remarkable, a seemingly unending torso that still doesn't appear to be big enough to keep his long angular arms in proportion.

I recently splashed out a few pence on Dave McKean's version too. I'd previously had a bit of an aversion to a lot of McKean's comic book work, finding it a little overdone. But I might now have to reassess my judgement. His bountiful illustrations for the Graveyard Book are rendered in stripped back, brush pen giving a wonderful fluid sense of movement of the Man Jack as he 'slipped in, and wisps of night time mist slithered and twined into the house through the open door.' 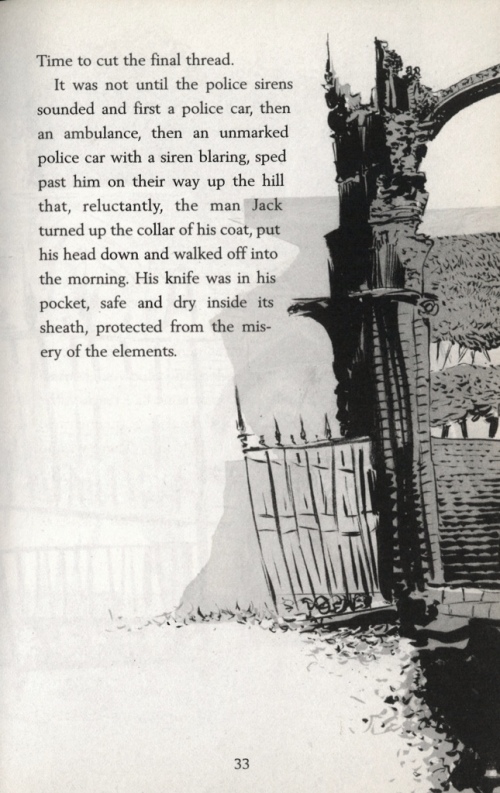 None of which helps solve my opening chapter conundrum. If I can ever capture even a fraction of the atmosphere of How Nobody Came to the Graveyard I'll go to my grave a happy man Jake.