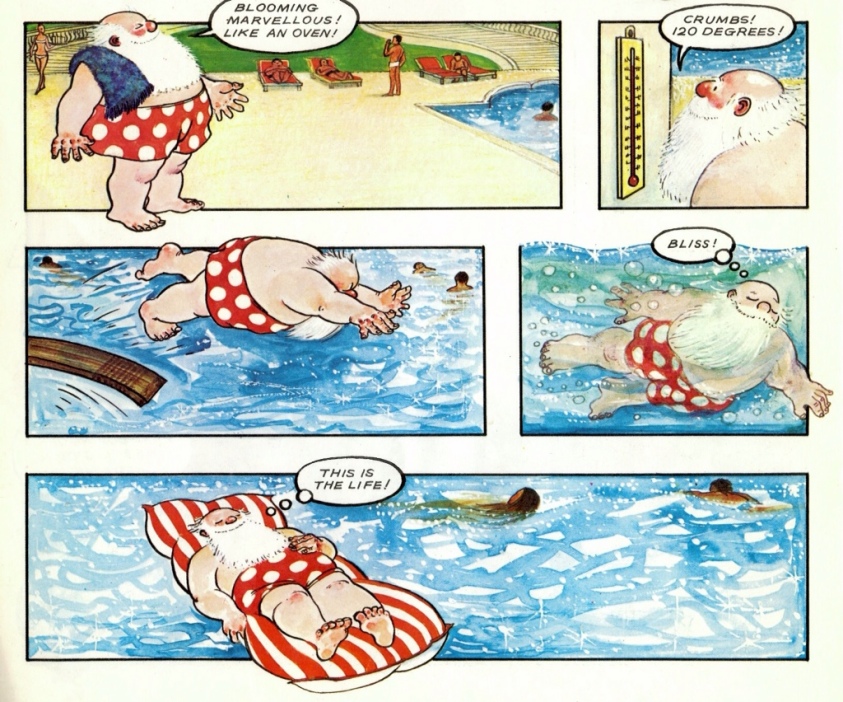 You didn’t think I could get through an entire Advent without a bit of Raymond Briggs did you? This time last year we met the thoroughly working class Father Christmas as he grumbled his way round the ultimate night shift.

A right Blooming Christmas it might have been, but there were signs that the rest of FC’s year wasn’t all that arduous – dreams of beaches, piles of holiday brochures and walls adorned with posters of Capri and Malta. From this sprung the wonderful sequel, Father Christmas Goes on Holiday.

Have reindeer will travel seems to be FC’s raison d’être (not that his French is that good), and as he waits for next years Christmas letters to arrive he sets to work building a flying camper-van that wouldn’t look out of place on George Clarke’s Amazing Spaces. 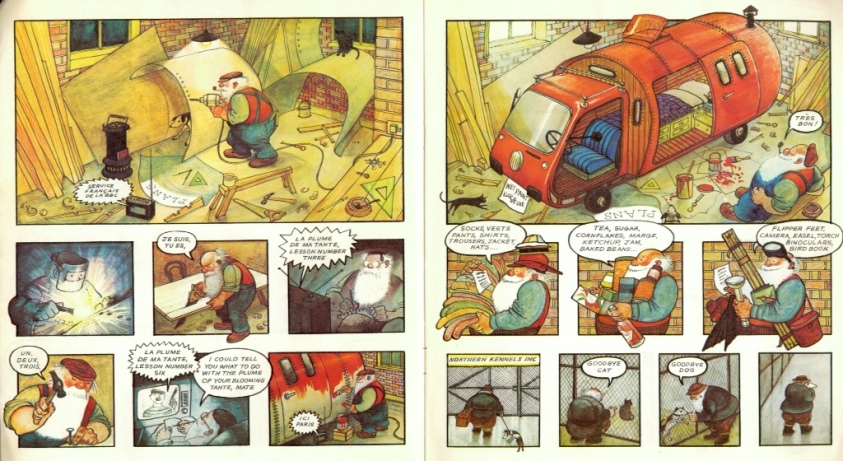 I rather like the deadpan summary in the opening pages: ‘Father Christmas visits France, Scotland and Las Vegas while on his annual vacation.’ It’s the sort of no-nonsense description our hero might himself have provided, and one that undersells his rather eventful search for a holiday spot where he might be able to forget his day job. 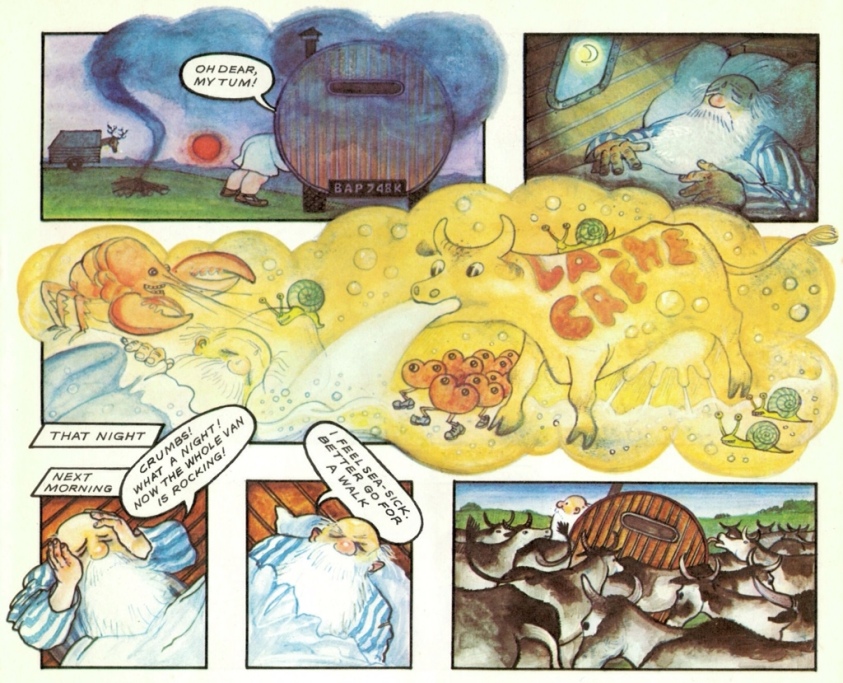 La Belle France initially seems to suit the old boy down to the ground, particularly the food and drink. But he soon discovers there’s a price to be paid for living the high life. The sickening dreams visited upon him in his bunk will chime with anyone who’s ever woken up with a hangover in a field.

Scotland and a plate of haggis might seem like a better fit, but not for someone who has already endured the world’s worst weather on Christmas Eve. So he’s soon scarpering to the bright lights of Las Vegas.

Finally the old boy gets to live out his shattered dream of the sunshine high life from the previous Christmas. And soon he’s living it up in Nero’s Noshorium, before popping on a monocle from a Christmas cracker and spinning the roulette wheel like a cut price Bond villain.

But he’s happiest by the crystalline reflections of the pool. Decked out in his polka dot bathers he could easily grace a Donald McGill postcard from Las Vegas. 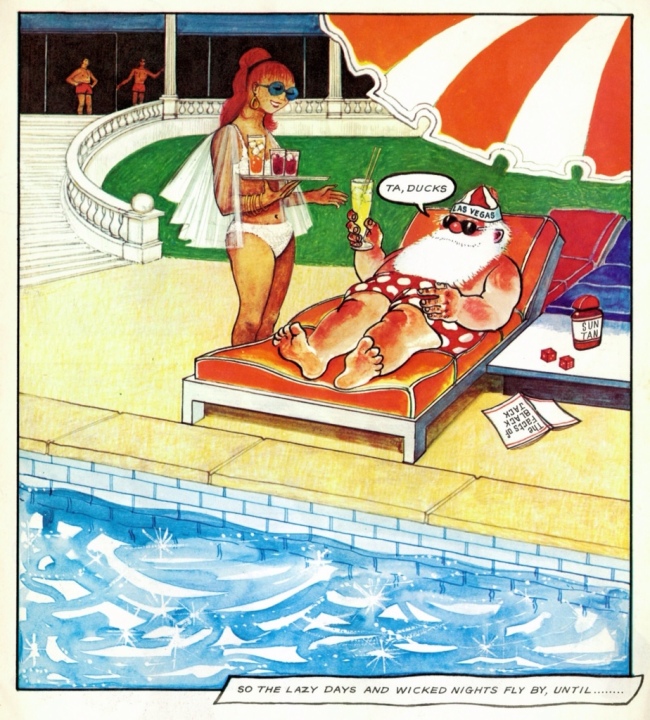 But why did FC not visit Capri, Malta or Majorca – his dream locations from the first book? The answer lies in events from Briggs’s personal life, as Nicolette Jones writes in her biography Blooming Books. ‘Before he wrote this book, Raymond Briggs’s wife had died and he was invited away three times that summer to France, Scotland and by his US publisher to Las Vegas. This became the itinerary for Father Christmas.‘

I’m not sure if he went to any of these places, but it doesn’t matter. I suspect visiting them in the company of the wonderful Father Christmas was a far better way to escape. 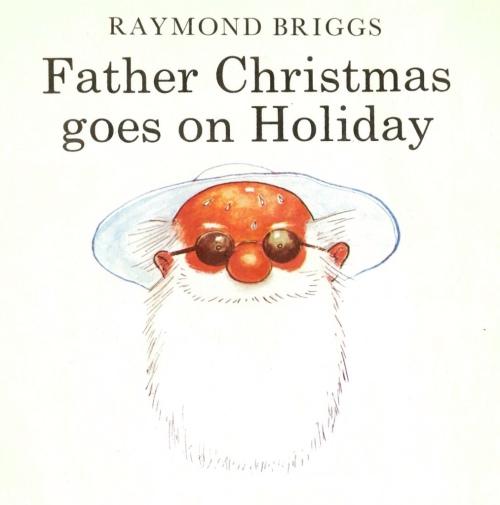 Inky Pinky Ponky - an illustrated collection of children's playground rhymes edited by Michael Rosen and Susanna Steele. Illustrated by Dan Jones, a resident of Cable Street in London's East End, Dan paints from life and his illustrations here reflect the vibrancy and diversity of his home during the early 1980s.
Loki's sunny spot #pouffe #catsofinstagram
What's this then? It's a spring issue of Puffin Post Illustrated by the great Pauline Baynes. Happy Easter x
New in my Etsy shop, Matilda Jane by Roy and Jean Gerrard.