Astrid Lindgren’s Lotta is a character every bit as strong as Pippi Longstocking, if not in body, then in sheer wilfulness. Think of her as a Swedish cousin of My Naughty Little Sister, or Lauren Child’s Lola (whose best friend is perhaps un-coincidentally also called Lotta).

This series is aimed at a slightly younger audience than the Pippi books, with the central character a pre-schooler. It’s that age difference that gives the books their drive and humour. For Lotta age simply isn’t an issue. She believes she can do anything. 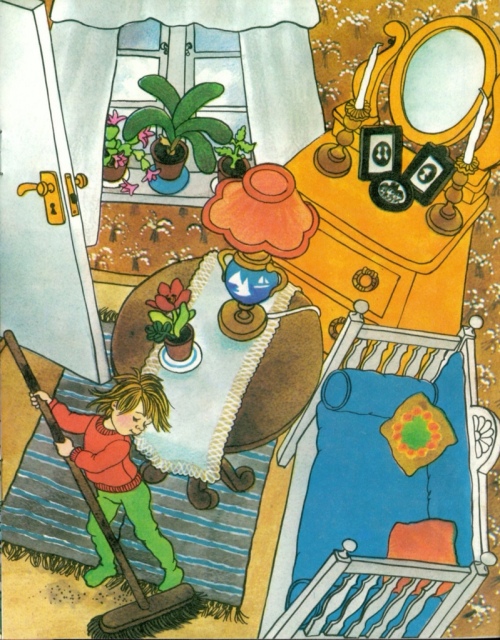 Lotta’s Christmas Surprise begins with our heroine boasting that she can ski just like her older siblings Jonas and Maria. ‘It can’t be very hard. First you go in one direction and then in the other direction, and all the time you can wobble your bottom. Anyway I can wobble my bottom already, she thought, trying it to see how good she was.’ 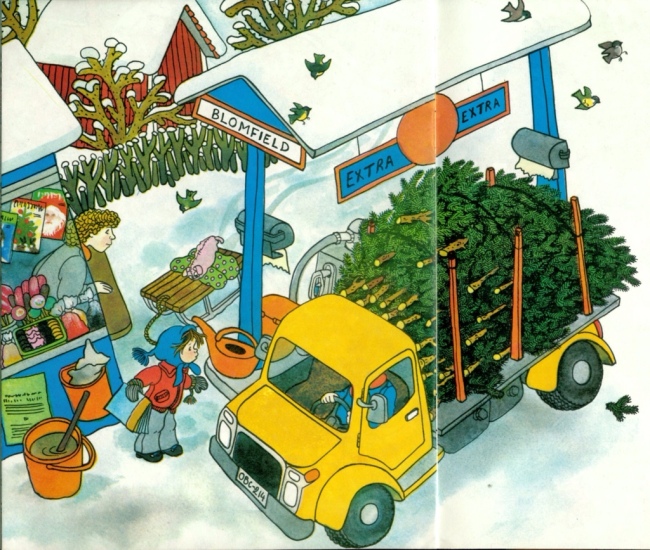 Unfortunately Lotta discovers it isn’t quite so easy as she thinks, particularly after her mother gives her a loaf of bread for the neighbour and a bag of fish heads for the bin. Adding her toy pig Bamsie on top of this an inevitable mix up occurs, leading to a mad dash to save her pig from the jaws of the dustbin lorry.

But there is worse to come when her father announces that all the town’s Christmas trees have all been sold. While her siblings remain at home wailing, Lotta sets off on her toboggan and proves that she really can do anything. A chance meeting with a capitalist pig of a fir tree merchant leads to her saving the day, for just ten pence.

Ilon Wilkland’s illustrations are true to Lindgren’s world. They maintain the quirky, wonky perspective of Ingrid Vang Nyman, and add vintage 70s Swedish fashions, lashings of pancakes, berries and enough liquorice boats to make you drool all over the page.

I recommend you go after the original editions of the Lotta books, as the reprints dilute their Swedish character by renaming her siblings Mary Lou and Tex (or something). They’re a real scandi treat for Christmas.

One thought on “Lotta’s Christmas Surprise by Astrid Lindgren”