We went out for one of our little new year’s traditions this morning, breaking the tedium of the New Year’s restock and raiding the supermarket shelves for cut price Annuals. Steering the children skilfully away from a Flappy Birds cash in, we came away with the old reliable Beano Book and a reprint of some Topper strips. These have already been demolished, but luckily I have a secret weapon in reserve – the very first Puffin Annual from 1974.

I couldn’t believe my luck when I picked this treasure up in Oxfam last year. The contents read like a who’s who from the golden age of children’s literature, promising contributions from Joan Aiken, Roald Dahl, Tove Jansson, Michael Bond, Raymond Briggs, Quentin Blake… the list goes on.

The annual was a spin off from Puffin Post, the groundbreaking children’s book club run by visionary editor Kaye Webb. Open practically any of your favourite children’s books published between 1960 and 1980 and you’ll see Kaye’s byline. For two decades a book under the editorship of Kaye Webb was a sure sign of quality. 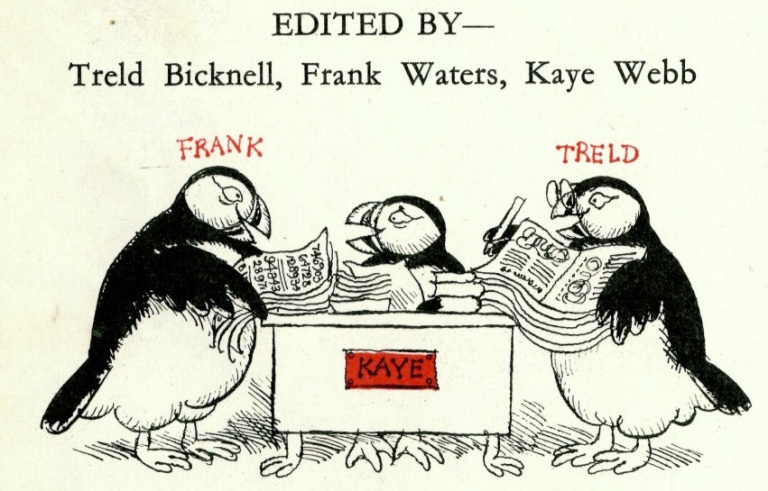 Webb was the person who turned the job of children’s author from one of the more eccentric out-postings of the literary landscape into a new type of pop cultural celebrity. The publication that helped achieve that was Puffin Post. 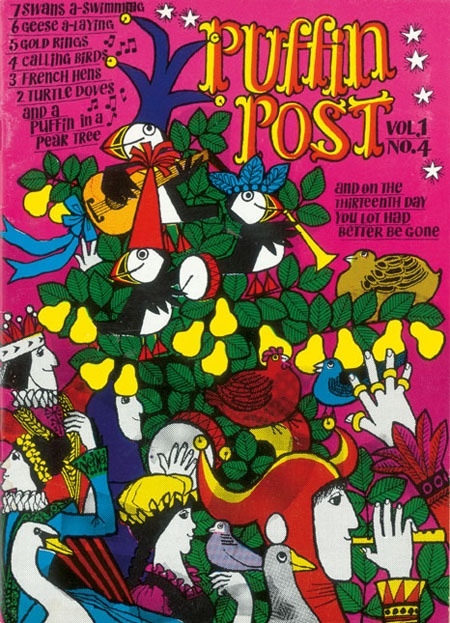 Using her amazing powers of persuasion she coaxed these curious writers out of their sheds and into the lives of their young readers. Esteemed authors not only wrote for the quarterly magazine but attended the club’s roadshows in the school holidays. This was the beginning of the publicity rite of passage that is now part and parcel of writing for children. Kaye was the organiser and ringmaster of these authors’ parties, and it was her as much as the stellar talent who helped attract the club’s 80,000 members.

The 1974 Annual shows exactly what drew readers to Puffin Post. The front cover by Australian illustrator Jill McDonald could be reprinted today without any need for an update. Her tubby take on the Puffin logo stands as one of the most iconic characters in the world of children’s books – despite never having starred in its own title. 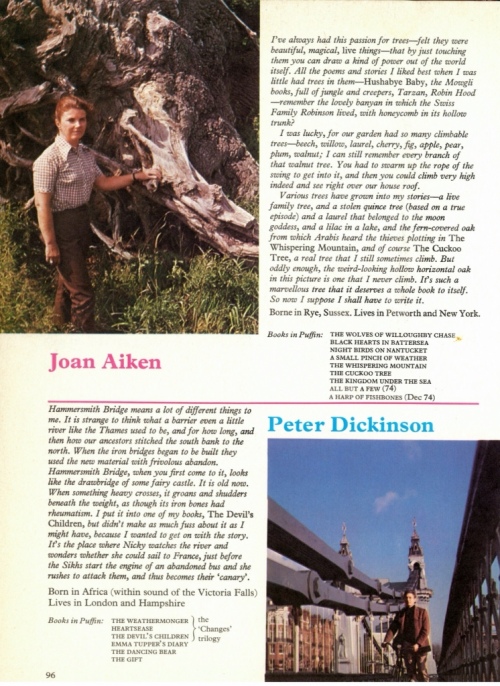 We begin with a story from Joan Aiken, telling one of her smart modern fables. The Faithless Lollybird is a little grey bird with a talent for weaving. ‘It would wind a scarlet strand round its neck and a green one round its stomach, carry a pink thread in its beak and clutch a silver one in its claws, so that if it had ever stopped, you would have thought it was a travelling christmas tree, all sparking and rainbow coloured.’

The bird breaks away from the loom carrying its thread around the world, and through the pages of the story, weaving a sparking web from Piccadilly Circus to the dome of Saint Peter’s in Rome.

Raymond Briggs teams up with Peter Dickinson to create a series of Impossible Pets, from the Fandango and the Knowit to the awful Cuddlyjob – ‘I hope you do not glimpse, beneath that fur, a gleam… that might be… teeth.

Russell Hoban provides a quartet of timeless tales about the amazing secret lives of a collection of not so inanimate objects. They were later collected and published as a book, taking its title from the best of them, La Corona and the Tin Frog. This compact fairy tale is a take on the story of the frog prince – though in this case he’s all frog.

Nicholas Fisk, fresh from creating Grinny, one of the creepiest children’s books of all time, stays on form here with another sci-fi horror, The Boy, the Dog and the Spaceship, a sly twist on the Invasion of the Bodysnatchers that will have you itching all over.

Quentin Blake is at his silliest here, providing some gems from the Improbable Puffin Book of Records. For example, ‘The largest number of penguins ever recorded in a telephone box at one time was in Old Brompton Road in London in 1904. There were 149 of them, together with an old lady who was trying to make a telephone call.’

Tove Jansson, who had just published one of her first books for adults, The Summer Book donates one its more child friendly chapters ‘The Cat’ in which young Sophia attempts to tame a rather undomesticated feline. Thrillingly Tove also provides some fabulous illustrations of the ill tempered creature, not included in any other edition of the story.

Even more exclusively Roald Dahl is on hand with a brand new short story called The Upsidedown Mice in which we see the germ of an idea that took root in The Twits: A poor but happy man called Labon attempts to rid himself of a mouse infestation by glueing all the furniture to the ceiling. The mice attempt to turn the world the right way up by standing on their heads, and are done in not by the shrinks, rather a rush of blood to their brains. 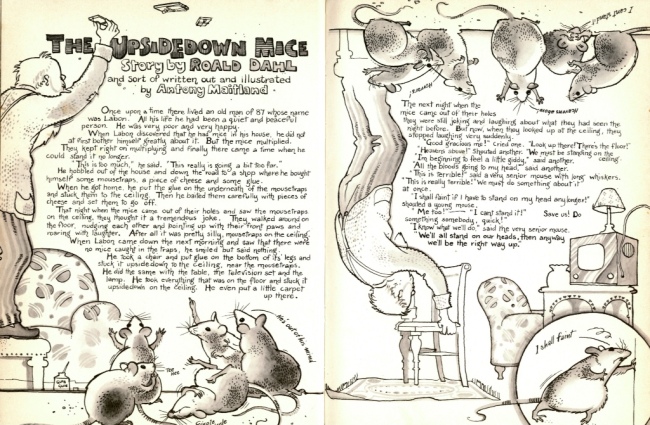 Roger Lancelyn Green, author of classic retellings of the Norse legends and King Arthur explains the origins of another much loved children’s series, Narnia, by his friend C.S. Lewis.

He explains how the books only really took shape when Lewis invented Aslan, and that the incongruous appearance of Father Christmas in The Lion, the Witch and the Wardrobe was a ‘left over from the first pre- Aslan idea for the book. It was a picture which was too vivid to be left out. For Lewis built up the Narnian stories from pictures, perhaps sometimes from dreams.’

I could go on. I’ve not even mentioned the story by Paddington author Michael Bond, a Professor Branestawm adventure, or the illuminating interviews with Edward Ardizzone and Nina Bawden… But I will be returning to the world of Puffin throughout the coming year, picking some of the best bits from its time under Kaye Webb’s editorship. There’s Nuffin’ Like a Puffin.

16 thoughts on “Puffin Annual Number One”