Oliver Postgate and Peter Firmin, fresh from reimagining the Norse sagas in cardboard moved on to the dark corners of the European folk tale for their next major venture, The Pogles. 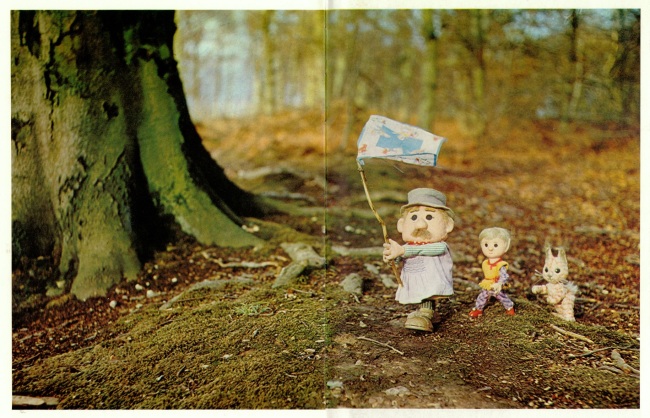 Viewers were invited into the woodland behind Firmin’s barnyard studio in the Kent countryside, where a family of centuries old tree dwelling small people called Pogles lived. Postgate ruled out allying this brand new race with gnomes, who he hated, and Hobgoblins who he thought ‘a bit malicious’. 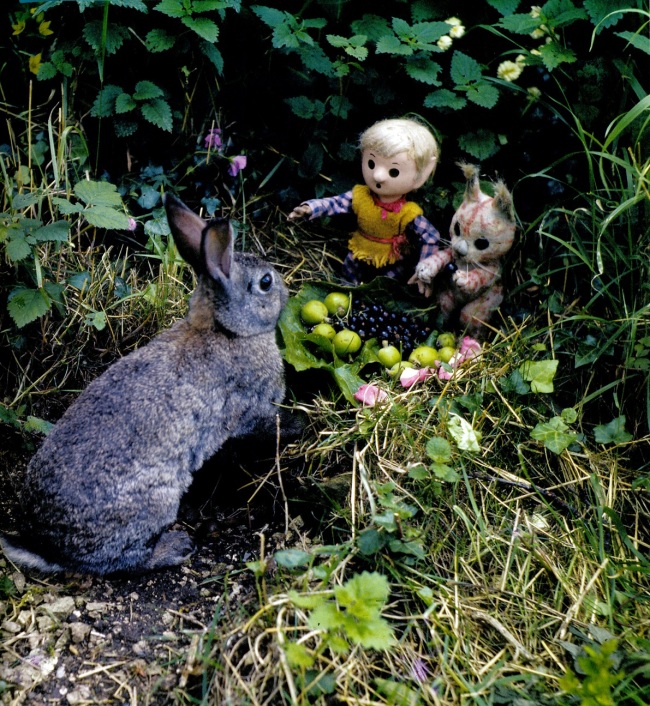 The first Pogles story contained all the elements of the classic fairy story as remembered by the brothers Grimm; an ordinary old couple, a magic bean and a battle between the king of the fairies and a truly hideous witch. There’s also a good smattering of the Moomin family dynamic. This is how Postgate describes the Pogles in his memoir Seeing Things: ‘Mr and Mrs Pogle were not magic-type people. They didn’t hold with magic and didn’t want to have anything to do with it. But suppose magic wanted to have something to do with them. How would small ordinary respectable people fare when faced with magic?’

They did what we’d all do – hide in our well appointed tree stump house and lock the door. These were ordinary people, not heroic Norse men. And truly the threat was, and still is, surprisingly scary for a show commissioned for the Watch With Mother slot. Fittingly the BBC scheduled it alongside other weird and wonderful european animations instead. There’s something unexpected about the force of the magic here – the bean rising from the ground and the witch transforming into a boot and kicking in the door. She was properly terrifying. 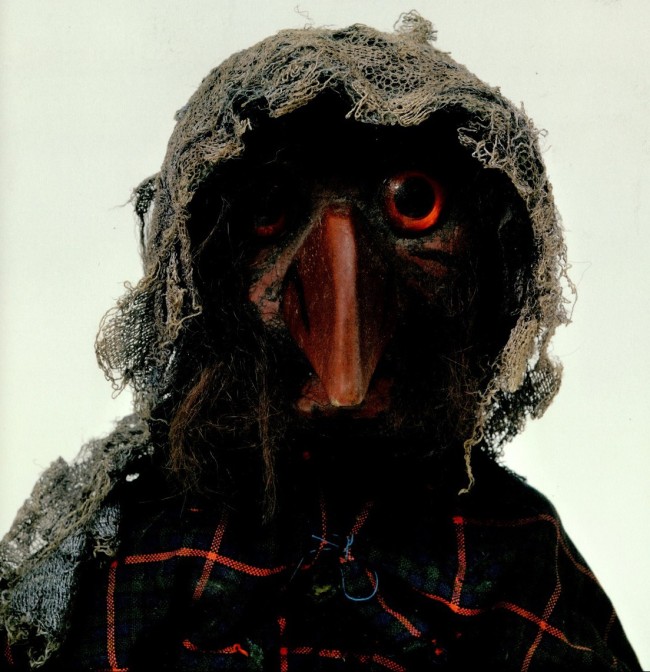 In the end Mr Pogle takes posession of the fairy king’s crown and defeats the witch in a magic contest, banishing her with an all consuming spell that chills with its finality. The witch is condemned to be ‘no thing at all, no shadow, no thought, no terror, no memory of evil, no touch of cold to foul the night, no thing at all… be!’ 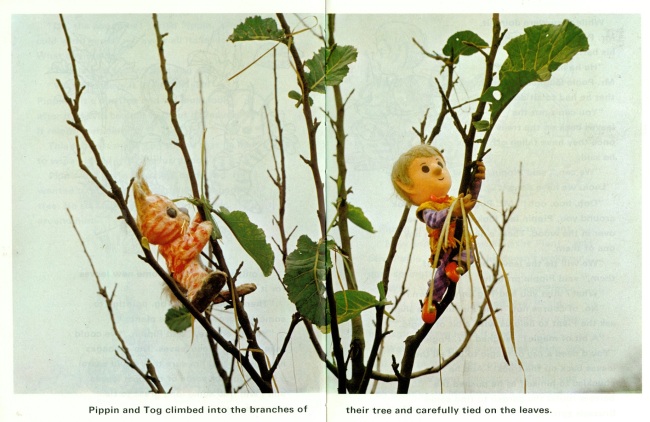 Unsurprisingly the high ups at the Beeb were concerned about the tone of The Pogles, as Postgate remembers. ‘Doreen Stephens, who was head of family programmes at the BBC told me the corporation’s view, which was that Mr and Mrs Pogle were very welcome at the BBC, and that friendly magic, as practiced by the Plant, was perfectly acceptable, but that witches screaming in the back garden were definitely non grata.’ 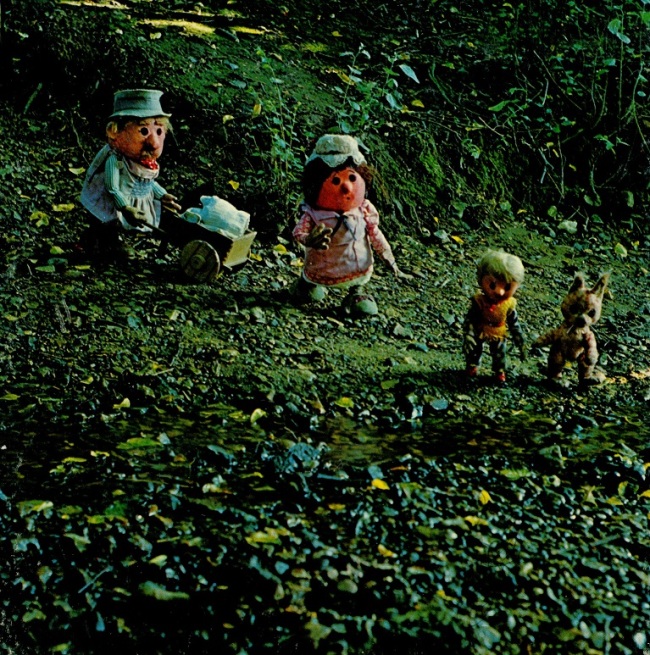 So the magic was scaled back in the next series, Pogles Wood, concentrating instead on sequences in which a newly introduced boy called Pippin and his squirrel friend Tog went off to find out about life in the countryside. Which might sound a little boring in comparison, but it was typically mesmeric. Postgate took the opportunity to engage his models with the natural world. Not an easy thing to achieve in stop frame animation.

‘Just in case you should ever be tempted to do so, may I give you a word of advice: do not try to make single frame films out of doors. The reason is simple: because the light keeps changing. While you are moving the puppets between frames a cloud moves across the sun. That means the next frame is darker than the one before. The effect on the film, as you can well imagine, is weird, like neon lights flashing on and off at regular intervals.’ 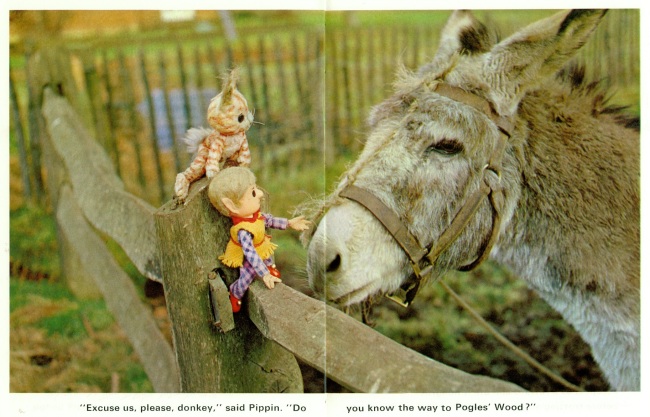 In fact this effect was rather mesmeric, if not exactly smooth. Postgate and Firmin were given the chance to produce a much glossier colour version of the Pogles’ world in a series of books published in the late 60s. They alternated Peter Firmin’s modern illustrative style with crisp colour photographs. The models are posed in witty interactions with the beautifully composed country backdrops. 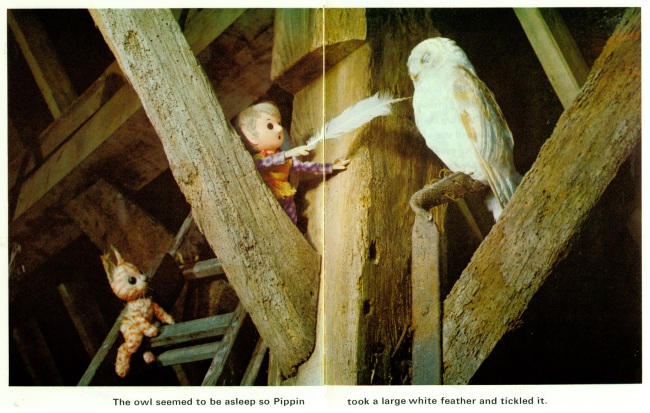 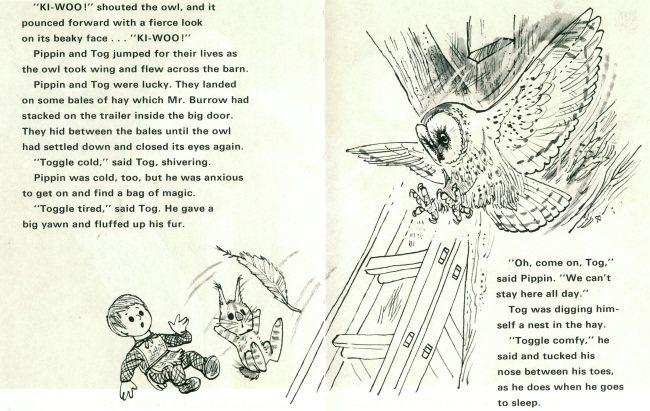 Sometimes the wildlife needed a little coaxing. Or in the case of these dead herring, careful arrangement in the water.

There was even an occasional, spectacular excursion away from the rural setting. 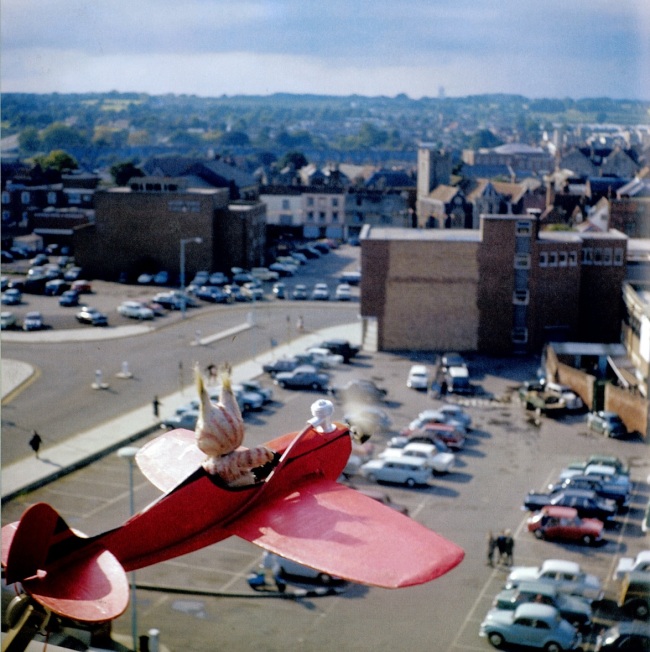 A third series expanded the Pogles world, adding stories told by the Plant along with ‘documentary’ elements (basically Firmin and Postgate’s kids dressing up). But the series continued through continual repeats and an Annual. ‘We put out a Pogles annual for each year up to 1974.’ Postgate writes. ‘They were full, rich confections but, like all annuals, they had their year and were gone. I must say I slightly regret this. There was good stuff in them. ‘

Amongst the good stuff was a regular spot for the witch, a not so forgotten memory for the Pogles it turned out. The 1972 edition featured the story of the Broken Jug, taking us right back to that first story as Pippin discovers fragments of the enchanted jug used by the witch to gain entry to the Pogles’ home. Pippin employs the same logical magic as Mr Pogle, dismissing the memory until she is reduced to a lifeless ornament. In true Smallfilms fashion readers were even given the opportunity to make their own hand puppet witch. 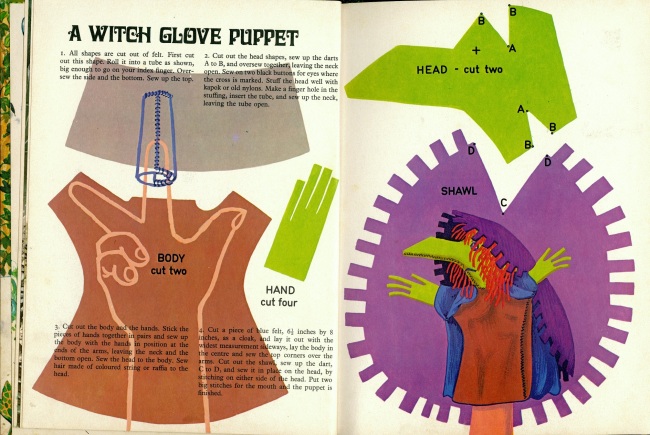 ‘”Well there’s nothing to be frightened of in this,” laughed Mrs Pogle. “Here hook it up in the corner of the cupboard; you can hang your hat on the end of its nose. It’s as long as a coat-hook!” And that I think really was the end of the witch, even the memory of her.’