As a child, along with books, the other essential thing in my life was my top loading cassette recorder with its library of half recorded songs from the top 40. I also had in my collection a handful of ‘listening and reading’ story cassettes which played till they stretched, warped and unravelled inside the machine. The two I remember best were the Cave of the Cyclops from Homer’s Odyssey and a dark twisted story about a little boy called Tommy and the dreaded Mr Miacca. I can still hear the warped, slightly gleeful voice of the narrator coming out of the tiny speakers.

‘Now his mother used to say to him, “To 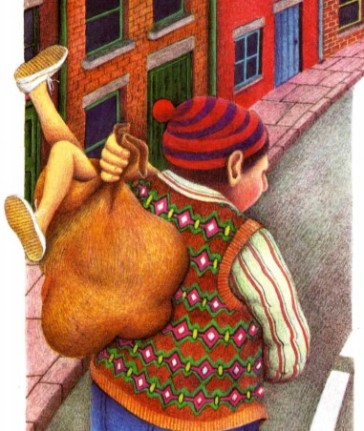 mmy, Tommy, be a good boy, and don’t go out of the street, or else Mr. Miacca will take you.”’

These were the days of the ‘stranger danger’ campaigns, and so I suspect I took to this story in the same way I did the public information films that were shown during school’s programmes – just look at this terrifying film from 1971. Listening on my tape player, (or Saisho personal stereo when on holiday) Mr Miacca sounded completely contemporary. What I didn’t realise was that this was actually a Victorian fairy tale. And in my own modern way I was hearing in the way it had originally been intended.

Fairy tales are an oral form, created to be read aloud, passing often ancient stories down through the generations. In the nineteenth century the Grimms succeeded in creating a definitive collection of stories from across Europe and many dating back hundreds of years. They were a publishing sensation and like any such phenomenon they created a thirst for something new. 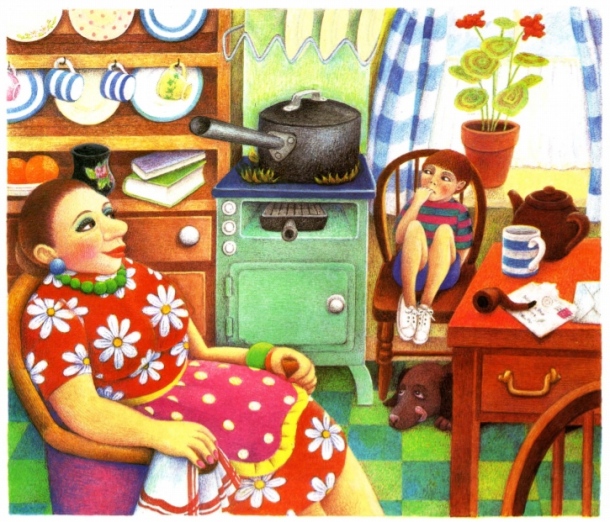 In the late 19th century the English, being English, decided they’d had enough of this foreign junk. They needed Real English Fairy Tales, for Real English People. So in 1890 an Australian, Joseph Jacobs came along and gave us exactly that: a two volume set called English Fairy Tales.  Amongst the stories he collected was Mr Miacca, told to Jacobs ‘from the memory of Mrs B. Abrahams, who heard it from her mother some 40  years ago’

‘When Mr. Miacca got Tommy inside, he pulled him out of the bag and set him down, and felt his arms and legs. “You’re rather tough,” says he; “but you’re all I’ve got for supper, and you’ll not taste bad boiled.’

Mr Miacca is firmly in the fairy tale tradition of ogres, giants and various monsters with a taste for child flesh. It’s there in Jack and the Beanstalk (another English Fairy Tale collected by Jacobs). It was also there on my other cassette, the Cave of the Cyclops in which wily Odysseus tricks the one eyed giant, changing his name to ‘nobody’ before stabbing Polyphemus in the eye with a wooden stake. The cyclops’ cries of ‘nobody stabbed me’ are ignored by his neighbours, allowing Odysseus to ride out tied to the underside of a sheep. Little Tommy also has to rely on his wits to survive.

‘So poor Tommy Grimes had to creep under the sofa, and Mr. Miacca sat on it and waited for the pot to boil. And they waited, and they waited, but still the pot didn’t boil, till at last Mr. Miacca got tired of waiting, and he said: “Here, you under there, I’m not going to wait any longer; put out your leg, and I’ll stop your giving us the slip.”’

What happens next is a trick right out of Odysseus’s book.

‘Tommy put out a leg, and Mr. Miacca got a chopper, and chopped it off, and pops it in the pot. Suddenly he calls out: “Sally, my dear, Sally!” and nobody answered. So he went into the next room to look out for Mrs. Miacca, and while he was there, Tommy crept out from under the sofa and ran out of the door. For it was a leg of the sofa that he had put out.’

Fairy tales were frequently adapted by Jacobs to suit his idea of the story. In the case of Mr. Miacca he was unimpressed with one particular element of Mrs Abrahams recollection. ‘In her version Tommy Grimes was a clever carver and carried about with him a carven leg. This seemed to me to exceed the limits of vraisemblance even for a folk-tale.’

Jacobs further put his own stamp on the story by telling them ‘in the manner in which a nurse would tell them to children’, says the Oxford Companion to Children’s Literature. These adaptations proved influential and are ‘sometimes used today to provide the texts for modern picture book versions of traditional stories.’

I lost the tape long ago, but now have an illustrated paperback version (adapted from the Jacobs version) from 1967. Illustrations are by Evaline Ness, the American illustrator who has perhaps the coolest biography of any children’s author, having once been married to Eliot Ness, the leader of the Untouchables, the prohibition police squad who busted Al Capone. As a result Evaline had her own female bodyguard while she was learning her craft as an illustrator.

Evaline left Eliot and moved from fashion illustration into children’s books bringing her distinctive graphic design skills with her. She produced Caldecott winning books including Sam, Bangs and Moonshine and also the brilliant maps for the Chronicles of Prydian. With Mr Miacca she gives us a modernist take on Victorian England – more Dick van Dyke than Dick Whittington. The book has a vibrancy and is filled with experimental textures. According to her wikipedia entry she used ‘woodcut, serigraphy, rubber-roller technique, ink splattering, and sometimes spitting.’ The last one seems about right for this unsettling story.