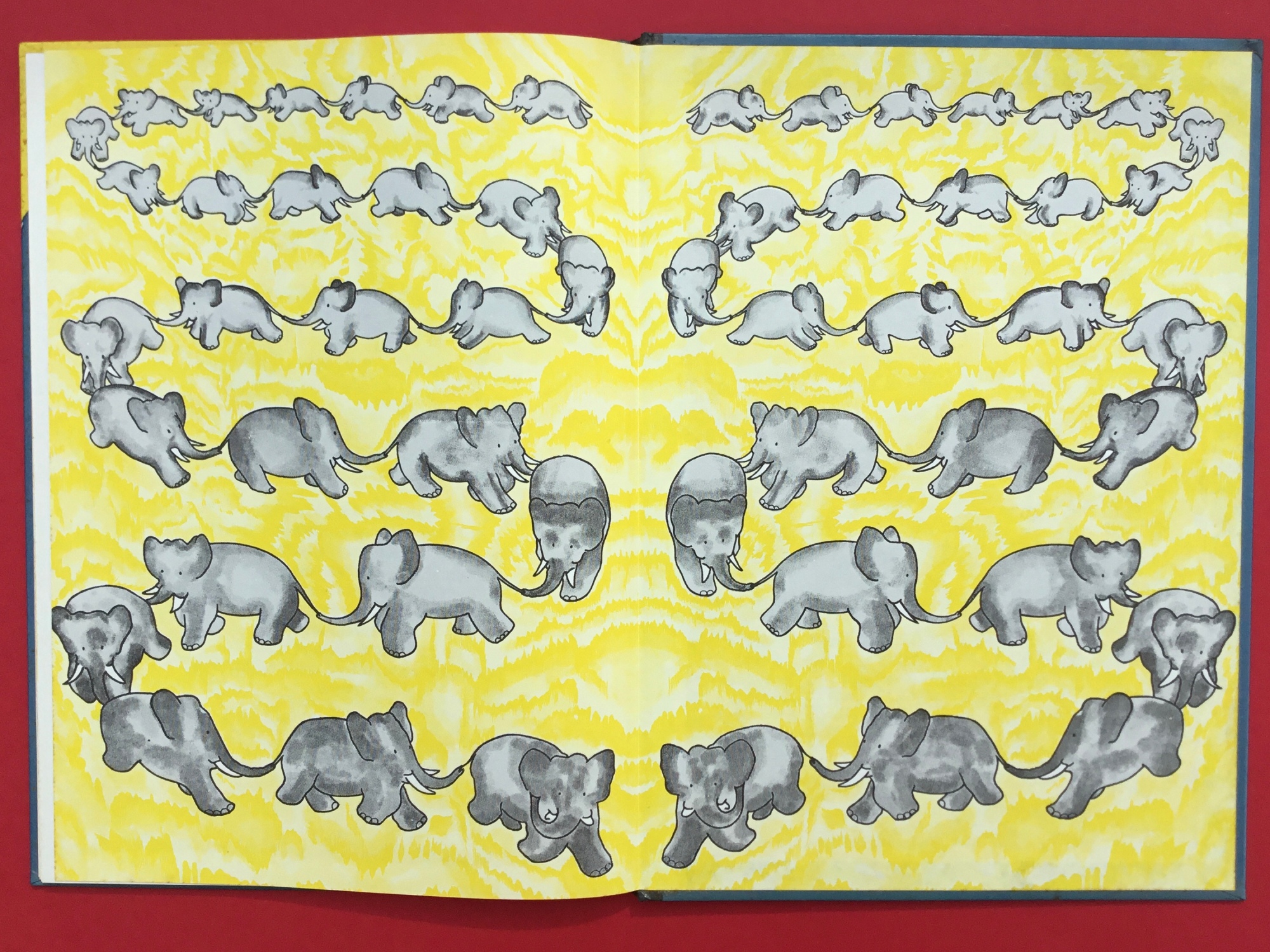 Babar is recognised all over the world, an adorable elephant character as ubiquitous as Miffy or the Very Hungry Caterpillar. It’s uncertain how many of those people have read Jean de Brunhoff’s original books. They’re much deeper, more emotional and significantly more troubling than a million baby grows would lead you to believe. The first three form an unofficial trilogy about the foundations of a brand new society.

The Story of Babar, in which a baby African elephant leaves his idyllic forest home and becomes civilised in Paris, was originally conceived by Cécile de Brunhoff as a bedtime story for her two children, Laurent and Mathieu. She handed all further responsibility for the character to her husband Jean, already an established artist. In 1931 he published The Story of Babar, the first in a series of six books produced at astonishing speed in the years leading up to his death in 1937.

The elephants’ idyll is almost immediately broken by the arrival of a cruel hunter. Writing in her picture book history, Fierce Bad Rabbits, Claire Pollard calls this moment ‘the most upsetting image in the history of the picture book – the total grief of a child losing a parent mixed with our fear that something terrible might happen to the child.’

Pollard goes on to cite critic Bettina Hürlimann who theorised that there might be something ever more personal and profound going on here. ‘The books were written by a dying young father, who contracted TB in his early thirties, and who saw the books as a way of speaking to his children after his death. This is a moving thesis and one that might explain why Babar’s grief never seems to get processed.’

Babar certainly seeped deep into the consciousness of de Brunhoff’s eldest son, Laurent de Brunhoff, who picked up the mantle and continued the series. Aged just 21 and straight out of art school he effectively devoted his life to continuing his father’s work. ‘I just wanted the elephant to go on living and have his own life,’ Laurent has said. Perhaps he was also attempting to maintain a connection to his father and keep some part of him alive.

After Babar escapes the wicked hunters who have killed his mother he seeks sanctuary in an unnamed city modelled on Paris. Curiously the little elephant doesn’t appear concerned that he is now surrounded by people who look much like the man who slaughtered his mother for sport.

Having been kitted out by a kind, rich old lady, Babar pays a visit to the photographer. It’s a witty scene that plays with the picture book form, as we see the ‘photograph’ – which is another drawing of course. Jean de Brunhoff was an established artist before he began work on Babar and there are a couple of moments in the book where he steps back from his picture book style and presents us with something altogether more painterly.

This is perhaps a nod to adult readers, reminding them he’s worked very hard at this apparently simple stuff. Writing in the New Yorker, Adam Gopnik observes that de Brunhoff’s preliminary drawings looked ‘much more conventionally masterly… than the final drawings do. The sketches are sinuous and authoritative as de Brunhoff searches out form and dramatic manner. The completed Babar drawings, by contrast, are beautiful small masterpieces of the faux-naïf: De Brunhoff’s style is an illustrator’s version of Matisse, Dufy, and Derain.’

Babar is dazzled by this civilization; its fashion, architecture, style and technology all inform the series as it develops. When he returns to his homeland later in the book, dressed up to the nines, Babar immediately begins the process of ‘civilising’ his fellow elephants and a wider project that leads to the oppression of the other species of the Great Forest – more on this complex and contentious issue later.

Pleasingly, the second in Jean de Brunhoff’s series, Babar’s Travels, picks up where the first book left off. After his marriage to Celeste the newlyweds take flight in their balloon and the country of the elephants fades from sight.

The early Babar books were published in an oversized format, allowing the reader to really ‘climb into’ the epic double page spreads that are a special feature of this sequel.

Maurice Sendak, a huge fan of the books wrote that, ‘scale is crucial to de Brunhoff’s pictures. Those first editions of Babar have an undiminished splendour with their huge, delectable formats and grand, spacious compositions. They are as pleasing to the eye and as totally original as anything coming out of that fine and rare period of French art.’

Later in the book Babar and Celeste are sold to an animal tamer and put to work in the circus. Sendak singles this scene out as particularly effective. ‘No one before, and very few since, has utilised the double-spread illustration to such dazzling, dramatic effect… There is a spectacular circus scene… a tour de force of composition and a perfect example of de Brunhoff’s sly sense of counterpoint.’

Babar’s Travels is a hugely confident book, the work of an author now so comfortable with the world he has created that there is space for himself within its pages. As Sendak observes. ‘He has even placed himself in the scene, the young man sitting in the audience pedantically measuring Celeste for a portrait with his outstretched thumb and pencil. The line of text below the picture (“Fernando took Babar and Celeste to his circus. He made Babar play a trumpet while Celeste danced! They were very unhappy”) is so simple that the art absolutely “blooms” above the words. One can hear Babar’s trumpet music.’

And unfortunately this is where the colonialist message that was implicit in the first book – a wild animal seduced, tamed and improved by European culture – becomes explicit. Babar and Celeste break their bonds and in double page spread of pure horror attack and apparently kill their black captors whose injured bodies litter the ground.

Jean de Brunhoff was, as Clare Pollard writes, a man who ‘internalised the values of his society, and those values were problematic.’ It’s impossible to defend this scene of colonialist dominance, but taken within the context of the ‘fortunately, unfortunately’ format there are further, significant consequences for the elephants.

Babar and Celeste escape the island, rescued by a whale who unfortunately leaves them on a rock and forgets them. Rescued by a ship they are then sold to a circus, these ‘civilised’ elephants are again reduced to animals and within this narrative, slaves.

Meanwhile at home Babar’s rascally cousin Arthur sets in motion a chain of events that sees their arch enemies, the rhinos, raze the Great Forest to the ground. It’s another breathtakingly awful scene – and having witnessed the horror on the island, one that could easily end in total carnage. Fortunately there is a witty solution involving faces painted on elephants’ behinds. The rhino revolution is quashed, their leaders taken captive rather than killed.

De Brunhoff shows us that his elephant society is rooted in violence and the erasure of existing cultures. Whilst not intentionally racist, these scenes make an otherwise beautiful book a deeply uncomfortable read

Babar the King sees the culmination of the civilising project. Following the battle with the rhinos, Babar rebuilds, intent on bringing the wonders of the western world to the jungle. Rows of identical huts are built in boulevards overlooking the lake and a Palace of Work is constructed next to a Palace of Pleasure, including a library, theatre and pleasure gardens.

These scenes reflect Jean de Brunhoff’s own socialist beliefs. A supporter of the Front Populaire, his vision of Celesteville is what cultural historian Nicholas Fox Weber calls. ‘A feudal-like system (where) happy workers in identical houses thrive under the strong leadership of a single benevolent leader.’

In 1931 the de Brunhoff family visited the Exposition Coloniale in Paris. During its run, 9 million people attended this display of art and culture from French controlled territories. In his book, The Art of Babar, Weber says that people believed ‘the taming of wildness would guarantee a degree of safety and happiness … controlled exoticism was a national passion.’

Traditional elephant culture is still remembered (just), as the children gather to learn ‘the Song of the Elephants’, a mumbo jumbo series of verses passed down from the mammoths. It is wryly noted that even wise old Cornelius doesn’t know what the words mean. As Clare Pollard says, ‘their native language has been extinguished.’

In one busy spread, Babar sits on horseback, dressed in a sable cloak. He watches his people troop by dutifully in their work uniforms. One of the banners reads ‘Each for all. All for one.’ It’s a powerful socialist message, but this is a proxy France: how long before the workers rise up against their royal family and the parades turn to protest? No wonder the king has bad dreams.

Of course revolution never comes to Celesteville. Babar the King culminates in another precession. Zephir the monkey is at its head, waving a flag which reads: Long live happiness. It’s the end of an unofficial trilogy that’s taken young readers through profound emotional upheaval and seismic political change. Long live Babar.

All six of Jean de Brunhoff’s Babar stories are for sale in the #TygertaleVintage bookshop on Etsy.