Part one of the painfully prolonged adolescence of the Boy Wonder.

The last 80 years haven’t been kind to Robin. During that time he’s made some terrible fashion choices and been dogged by persistent rumours over his sexuality. He became a girl for a while. His parents keep getting murdered. He’s died, repeatedly only to be resurrected and finally came home as Bruce Wayne’s demon son.

For most people Robin will always be Bruce Ward of the sixties TV series, with his hard left jab and sharper catch phrase (“Holy purple cannibals!”). I love the TV Batman, but he’s cast a massive shadow over the character and has been conspicuous by his absence in the recent Batman movies. Which is a shame, because Robin – or at least the succession of kids who’ve filled that role – has often been a far more interesting and nuanced character than brooding Bruce Wayne.

Robin was first introduced in 1940, two years after the first Batman stories, as ‘The Laughing Young Daredevil’. He turned Batman from solitary street fighting toff into what Grant Morrison describes in his book Supergods as, ‘dashing big Brother, the best friend any kid could have.‘ Then, after 14 years of happily swinging about together, a villain far more deadly than the Joker or Killer Croc came between them.

His name was Dr. Frederic Wertham, author of the 1954 book Seduction of the Innocent. In it the Psychologist explained how violent comic books were a danger to susceptible young minds. It’s an argument that’s been trotted out consistently ever since. Whether it’s Rock & Roll riots at screenings of Blackboard Jungle, or high school massacres influenced by Marilyn Manson, certain adults love to believe that it’s these entertainments alone that are turning out generation after generation of damaged youth. 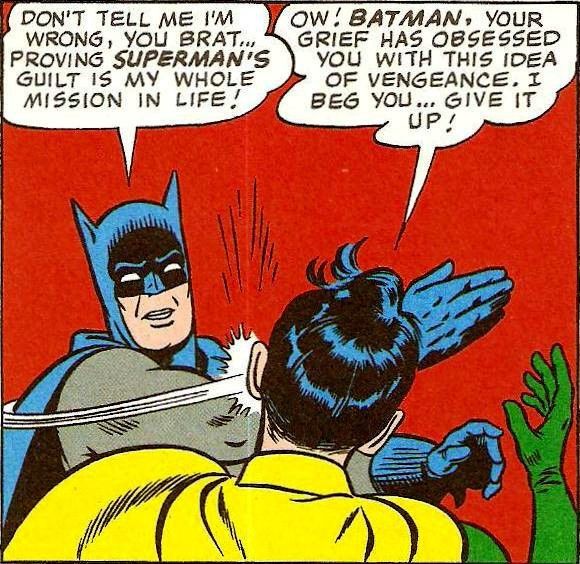 But the fallout of the book was much worse than a simple ‘X’ certificate or Parental Advisory sticker. Senate hearings followed and a draconian Comics Code was imposed that almost destroyed the industry. The Superheroes were left impotent and powerless to fight back. While many of them perished, Batman survived by turning his back on crime alley and launching his crusade against a succession of bizarre sci-fi adversaries like Rainbow Batman, Zebra Batman and what Morrison calls ‘a creature from dimension X that resembled a one-eyed testicle on stalk like legs.’

But Robin was singled out for special attention by Wertham, who’d spotted a homosexual subtext in his relationship with Batman. All that leather and rope had got the old boy in a right old lather. The innuendo rubbed off on the fictional boy wonder. As Morrison has it he was ‘transformed from a bounding paragon of vigilante boy justice to a weeping, petulant nervous wreck who lived in fear of losing his beloved Batman to fresher boy partners – or, worse to the charms of Batwoman’. 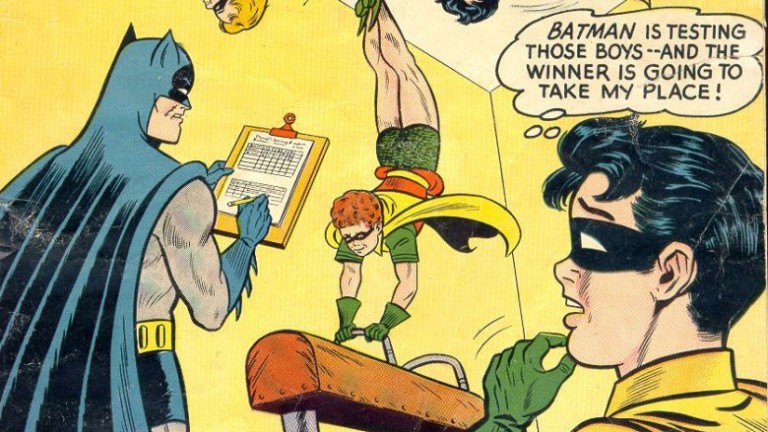 Unsurprisingly the dynamic duo gradually grew apart and Dick Grayson eventually turned his back on Batman taking up a rubbish new alter ego Nightwing. He was replaced in the 1980s by Jason Todd, who was initially a Dick Grayson clone, dead circus parents and all. His only distinguishing feature was his red hair, but Batman made him dye it black, to be more like Dick. Had Dr. Wertham still been around he would have had a field day over this disturbing detail.

A few years later Jason Todd was reinvented as a street urchin, his first meeting with Batman coming when he’s caught stealing the wheels off the Batmobile. This was the late 80s, and the DC comics universe had become a very different place, following the success of Frank Miller’s Dark Knight Returns. Jason Todd was flung fully into the darkness, a Robin who simply couldn’t handle the ‘great responsibility’ that came with the role.

I came to comics at this exact point, just in time to witness Jason’s slow unravelling. First we see him nearly strangle Two Face in retribution for his parents’ death, and then in issue 424 he comes up against a rapist with diplomatic immunity. Although we never see it, Robin appears to push him off his Penthouse balcony. I loved this edgy new character and believed his motives utterly. What else would a disturbed former street punk like Jason do in this situation? 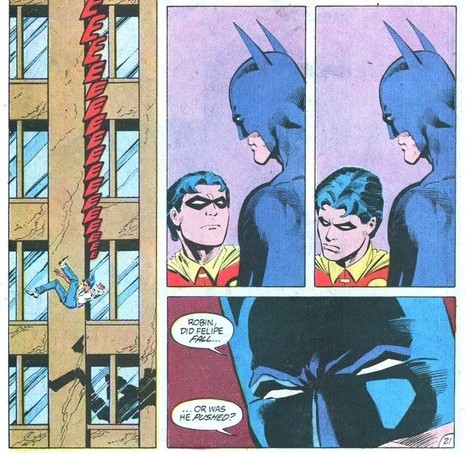 But many readers weren’t so keen. The new Jason Todd was just too far away from their beloved Dick Grayson ideal. And so DC comics famously held a phone vote. Should Jason Todd live or die?

Of course he died, to be replaced by another more boring Robin called Tim Drake. I won’t waste too much ink on him, only to say he was the Chris O’Donnell of Robins, a bland do-gooder, who managed to fight crime and get home in time to do his homework.

DC missed a trick here in not picking up on the Robin of Frank Miller’s Dark Knight Returns. In this absolute classic an ageing Bruce Wayne comes out of retirement, inspiring a young girl called Carrie Kelly to don the red, yellow and green. The Batman of TDKR (Holy acronyms Batman!), is a totally grim fascist avenger. It’s only the arrival of Kelly that saves him from himself. In one beautifully touching scene we see Batman catching his new sidekick as she slips from his glider. He catches her in his embrace. ‘Good soldier, good soldier,’ he repeats, echoing his feelings about the departed Jason Todd. Beautiful stuff. 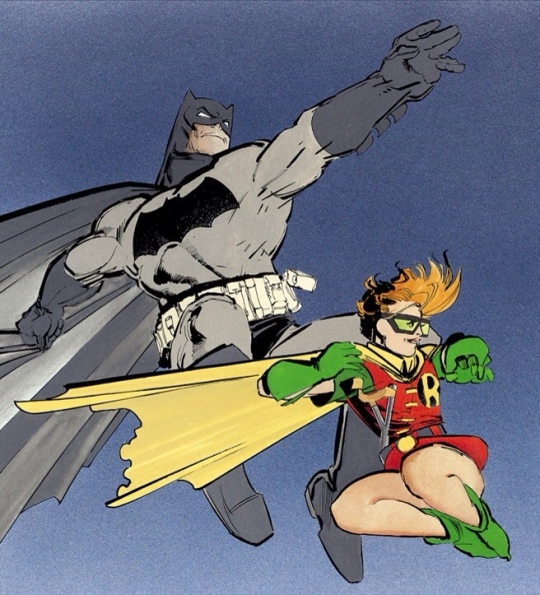 Then after over a decade of upright, uptight Tim Drake along came the mysterious Hush and the (slight) return of Jason Todd. I won’t give away too many details, but the novel opened the door for a full blown resurrection of the former Robin in Under the Hood. Todd is brought back to life by Batman’s lover / nemesis Talia Al Ghul, and sets off for Gotham under the same domed Red Hood once worn by the Joker (see Alan Moore’s Killing Joke).

The reanimated Todd fulfills his teenage promise and becomes a version of Batman happy to use lethal force. His defining story is Revenge of the Red Hood, in which Grant Morrison pointedly restores his original red hair and provides him with his own version of Robin, a girl called Scarlett, herself hell bent on avenging the new Robin who she believes led to her becoming deformed.

Yes, I did just say new Robin. But let’s leave the baroque Wayne family soap opera there for now. We’ll return with the story of the best thing to happen to Robin for many years: Damian Wayne, demon spawn of Bruce.