I had been going to write a post about great children’s books apps. You know those beautifully crafted, interactive things where you can fiddle about with your favourite characters, get the big bad wolf to blow your carefully constructed house down, while an out of work thespian overdoes the story-telling – that sort of thing.

So I had a look around and downloaded some beautifully crafted work; a gorgeous version of Oliver Jeffers’ Heart and the Bottle; an engaging take on Cinderella by Nosy Crow, which was packed with wit and visual surprises; not to mention the stunning Alice and Moomin apps.

My six year old daughter loved them all, really engaging with the interactive storytelling. My seven year old son was considerably less impressed. He loves having stories read to him, but is at an age where the simple act of moving a character around or pouring a cup of tea isn’t really enough. It’s a bit like asking him to return to the lift the flap books he read as a toddler.
Where, he wanted to know, was the Mr. Gum app? The Mr. Stink app? The Mr. Twit app? We found a Mr. Grunt app – the fleetingly fun Beard of Bees. But beyond that there was virtually nothing for older readers. No Artemis Fowl, no Percy Jackson, certainly no Harry Potter. Not unless you count the clunky, frustrating Pottermore – an online attrocity that sent me screaming back to my paperbacks.

After a few minutes, he was back to playing Snoopy’s Street Fair. The story apps just didn’t offer enough variety, after one sitting there was nothing left to see. They aren’t great value for money, not when you’ve got several hundred levels of Angry Birds to catapult through for a fraction of the price.

China Miéville recently gave a speech at Edinburgh about ‘The Future of the Novel’. In it he came up with some interesting ideas about where digital publishing could be heading. And where it was not, ‘The enhanced ebook, with soundtrack and animation? A banal abomination‘, he thought.

China looked to the experience of the music industry. Publishers find themselves in much the same place record companies did a decade ago. With their heads in the sand, fretting over piracy and not engaging fully with the possibilities of the new technology.

Miéville suggested that instead of fighting ebook pirates, we embrace them. Instead of seeking to keep texts ‘closed’, locked hunks of digital information owned by a single author, we open them up to readers and allow them to reinterpret them in bold new ways.

‘Be ready for guerrilla editors. Just as precocious 14-year-olds brilliantly – or craply – remix albums and put them up online, people are starting to provide their own cuts of novels. In the future, asked if you’ve read the latest Ali Smith or Ghada Karmi, the response might be not yes or no, but “which mix”, and why?’

I’m not entirely convinced that this is exactly the way things will end up. It has a whiff of the ‘in the future we’ll all be flying around on jetpacks‘ type of futurology. But he does get to the core of where many current ebook / apps are going wrong. They ignore the text, and the possibilities it offers, concentrating instead on dressing (very well known) books up with pretty pictures and sounds.

And of course we are already ‘remixing’ books. There’s Twilight: The Sex Tapes, better known as 50 Shades of Grey. Interesting that the first mega-successful text mash-ups should have come from children’s books. I think it’s likely that children’s books will continue to lead the innovation. They’re well suited to being messed around with. As well as having visuals to offer, they provide distinctive characters that can be re-imagined in new scenarios and constituent parts that can be broken down and put back together again.

‘The novel has to find somewhere else to go.’ 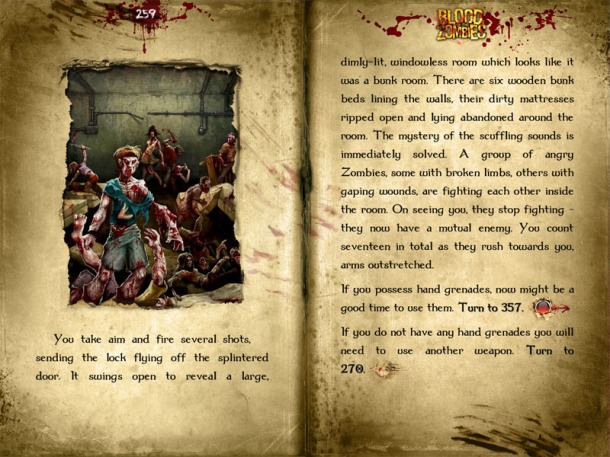 A few app developers are beginning to explore the possibilities that the text has to offer, combining it with the principles of gaming. Tin Man Games, are about to launch a version of Ian Livingstone’s Blood of the Zombies, the Fighting Fantasy gamebook where you get to choose your own path through the adventure. If their previous attempts at these sort of apps are anything to go by it will be a classy conversion.

Another company, Inkle put out a new version of Frankenstein last year to great acclaim. It applied this same ‘choose your own adventure’ idea to Mary Shelley’s classic. Although you still read the book in traditional chapters, it is no longer presented as a piece of prose. Author Dave Morris has re-written the text as a conversation between the reader and Victor Frankenstein. It’s a hugely effective device – and one I imagine would hook a young audience who might find Shelley’s dense prose a little off-putting.

Inkle have now gone one step further, launching Inklewriter, the same technology that created Frankenstein. This intuitive piece of web software allows writers to produce their own interactive stories, giving you the opportunity to branch off on different paths before tying the different threads back together again. It’s a brilliant way of exploring the narrative possibilities offered by the novel. I’ll be trying it out soon with my children – and will blog on the experience, posting a kindle version of the story if you want to play along.

What’s clear is that we’re still at year zero in the development of the digital publishing. The Kindle is the ZX81 of the e-book market, it does the job, but is a blunt instrument, and an ugly way of experiencing a story. The iPad is great for some things (like lifting flaps, and blowing houses down) but isn’t really suited to reading entire books.

What we’re still waiting for is an iPod for books, a device that makes complete intuitive sense, and changes the way we read, and write books forever. Can’t wait.

3 thoughts on “Appily Ever After?”