Regular readers (he writes with a smirk) will have noticed that I’ve got quite a thing for quirky children’s fiction. So when the nominations for the Costa book awards came out at the end of last year I was immediately drawn to a book called Small Change for Stuart by Lissa Evans.

Stuart (aged ten but looks younger) has moved to dreary Beeton, the hometown of his crossword obsessed father. With nothing much to do Stuart begins investigating the life of his mysterious Great Uncle, the magician Teeny Tiny Tony Horten, who vanished many years before.

The discovery of one of his uncle’s old tricks, a money box containing eight threepenny bits, leads him to a series of puzzles. These come in the form of various outmoded pieces of machinery like a phone box, weighing machine and photo-me booth. Each solution takes him one step closer to his great uncle’s lost workshop.

Instead of immediately transporting us to a thrilling fantasy land, Evans places her magical world behind locked doors in mediocre museums, inside the walls of condemned houses and underneath the bandstand in the park.

Imagine Harry Potter if he’d never left Privet Drive (minus the abusive domestic arrangements). Stuart’s magical adventures are every bit as gripping as anything Rowling created for the boy wizard.  Though perhaps a better comparison would be Norton Juster’s The Phantom Tolbooth, a story about bored boy called Milo who finds a do-it-yourself turnpike tollbooth (another archaic piece of coin operated machinery) that leads him into a world where puzzles and wordplay are central.

Small Change spent, I was thrilled to find that Lissa Evans had already published the follow up – Big Change for Stuart. The sequel sticks to the same device of puzzle solving, but ups the ante by taking us off into a series of ever more outlandish adventures set in a parallel magical universe.

It’s a winning formula, and one that Evans expands into a series of fully realised magical worlds, each one bigger and better than the last. My favourite is the Cabinet of Blood, an illusion which sends Stuart and his next door neighbours, the nosy triplets April, May and June, onto four separate paths, each one tiled with a series of pictorial clues. Step on the wrong clue and a trap is set off. The brilliant solution and the tension created by the children’s separation is masterfully built, and the outcome heart stopping. 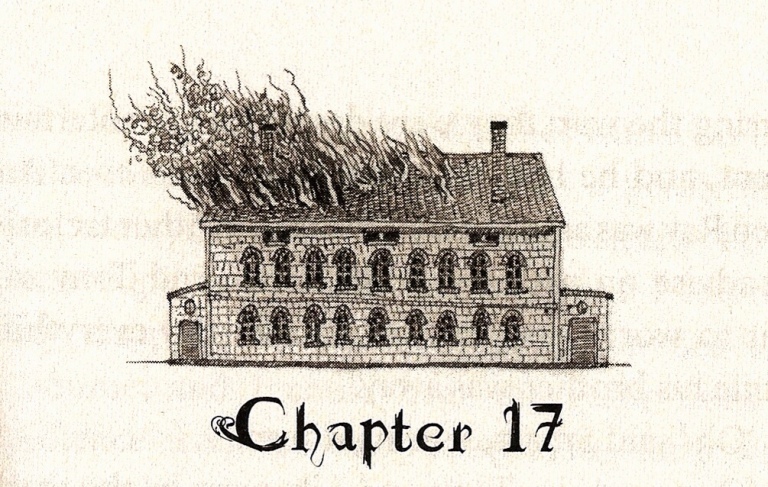 In book two Evans really develops the triplets. Although we already know April, the most bearable girl, her sisters were slightly two dimensional busy bodies. Even Stuart has trouble telling them apart. Here they emerge as identifiable characters at exactly the same time that Stuart begins to be able to give each identical face a name. It’s a lovely, knowing bit of character development.

Although the finale seems to round off the story nicely, Evans has suggested that she might be tempted to return for a third book, ‘There’s something mysterious about Beeton that was touched upon in the first book, and which definitely needs investigating.’

The fabulous detailed pictures, which are suitably small, though sadly restricted to chapter headings, are by Temujin Doran. Here is his lovely, funny film about illustration.

One thought on “The Magic of Stuart”