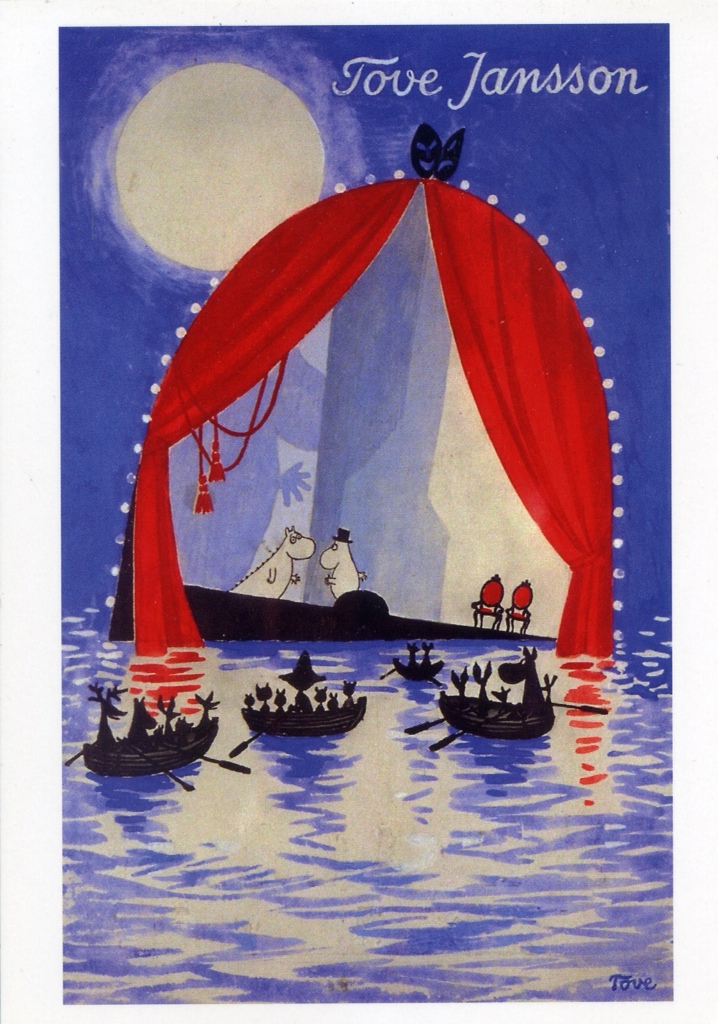 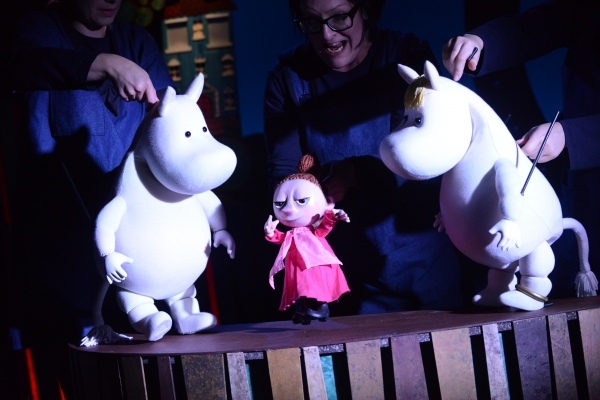 ‘It was so appallingly awful… Snuffkin overslept after a party and didn’t turn up at all, the lighting was all to hell, some of the props were missing and everyone gave a feeble performance.’ Not a review of Polka Theatre’s wonderful new production, Moominsummer Madness, but Tove Jansson’s own verdict on the dress rehearsal of the 1949 production of Comet in Moominland. 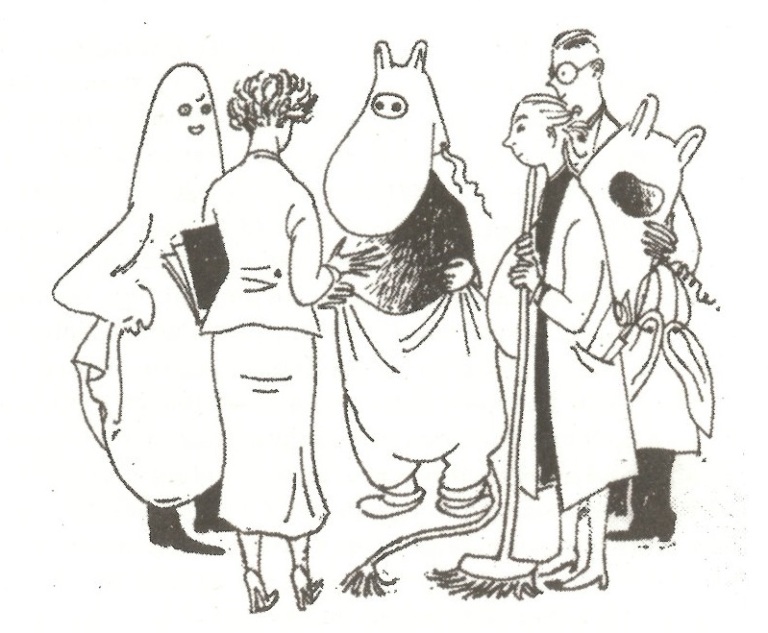 Five years later Tove wrote Moominsummer Madness, a story that borrowed heavily from these first faltering steps in theatre. She described the story in a letter to her friend Eva, ‘After a natural catastrophe the family gather round a theatre without understanding that’s what it is. On Midsummer night they are dispersed in various directions and after a muddled series of wanderings they finally come together again in the first performance of a play. All ends happily of course.’

This collaboration between the Polka Theatre, Royal & Derngate and Little Angel adapts the story for puppets quite brilliantly. This is only the second theatrical adaptation of Tove’s work to be staged in the UK and they’re following in the footsteps of Horse + Bamboo, whose Moominland Midwinter I reviewed in January. The two productions work as a perfect pair. Where Horse + Bamboo captured the still, menace of the winter story, Polka and co. harness the carefree magic of the midsummer tale.

We begin with a perfectly whimsical ear worm of a theme tune, welcoming us back to Moominvalley, a place that is both a safe haven and under constant threat from apocalyptic destruction. An earthquake is followed by an almighty storm, flooding the lower parts of the moominhouse, and more importantly leaving them without breakfast. A memorable piece of puppetry sees brave Moomintroll donning trunks and goggles and diving deep in to the flooded kitchen to retrieve soggy porridge, floating sausages and that all important coffee.

The puppetry is excellent throughout, with the four actors not just manning the beautifully crafted puppets, but really inhabiting the many roles. Little My is of course a perpetual scene stealer, and Snuffkin given a likeably human face. 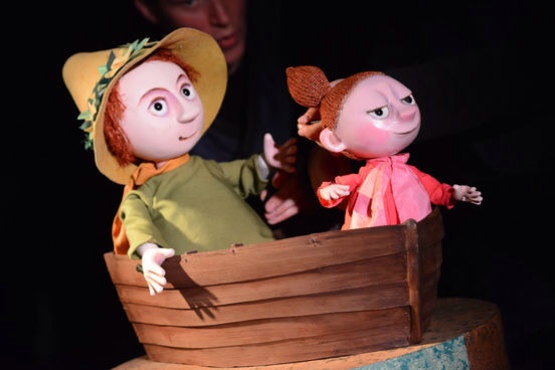 As I grow older though I find myself moving away from Snuffkin and Little My and becoming more like Moominpappa. I particularly identified with him here, as he engages in the creation of his first play. The great writer is upgraded from his usual pen and quill to a typewriter, which he attacks with a mixture of hot air, self-doubt and determination. By the end he is dancing Snoopy-like on the keys, paper flying out of the typewriter and across the stage.

Boel Westin writes about Moominsummer Madness in her biography of Tove Jansson, ‘At midsummer the border between dream and reality disappears.’ Good theatre (particularly for children) has to do this to be successful. And this is theatre without borders, from the moment we step into the auditorium a Hemulen policeman / park keeper patrols the aisles bearing a ‘NO LAUGHING’ sign. But this is no puppet, it’s actor Nick Ash in an almighty Hemulen costume, wagging his finger and berating children for confusing him with a Moomin. 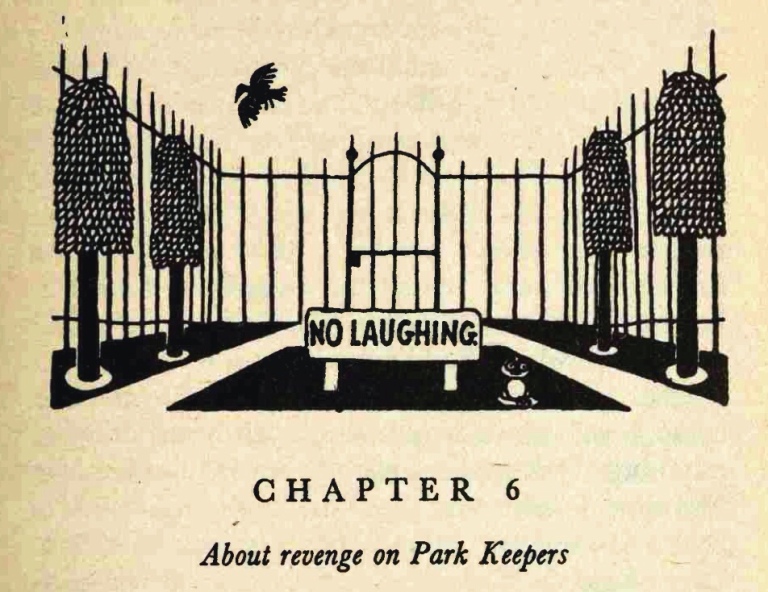 Maybe it’s my own fear of men in big furry hippo heads, but a slight change in tone and this roaming giant could have been quite terrifying. Instead he is the surprise hit of the entire show, prompting panto levels of call and response from the young audience whenever he pops up.

I needn’t have been scared though – as Snuffkin tells Moomintroll towards the end of the story, ‘Don’t be afraid, the June nights aren’t dangerous.’ Although disaster of one kind or another runs through Moominsummer Madness, this is perhaps the most fully rounded of Tove Jansson’s Moomin stories, existing inside that safe June bubble from which everyone emerges unscathed, but ever so slightly changed by the magic that can only happen on the troll bewitched night.