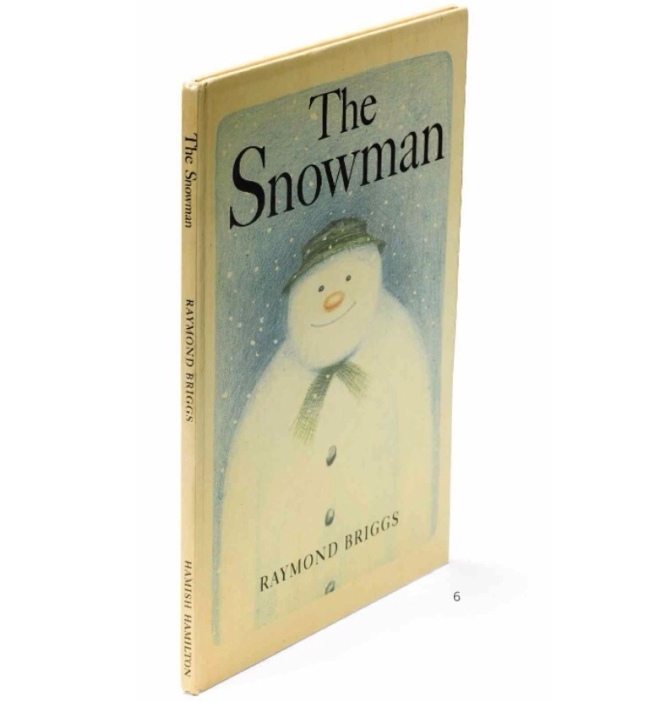 After two years and 55 advent blog posts I'm finally get round to writing about Raymond Briggs’ The Snowman. I’ve kind of been avoiding the book. It's not because I don’t like it, but rather that I’ve always thought, what more is there to say about a book that everybody knows inside out and back to front?

Happily, Quentin Blake’s charity the House of Illustration, which uses illustration to help develop literacy, creativity and communication, is auctioning off an annotated first edition of The Snowman today. So I thought I'd look at it through Brigg’s comments, which are both funny and rather revealing of the man and his story.

I suppose the big problem for me is the TV adaptation, which like anything that becomes part of the fabric of the season I do find vaguely depressing. It’s the Queen’s speech of children’s literature. And although Briggs was impressed by the effort the film makers made translating the look of his pictures, but wasn’t so keen on some of their additions. ‘In the film they made him put the teeth in. I didn’t like that at all.’

In fact the story originally wasn’t even necessarily set at Christmas – it was the film makers who added the Christmas trees and a Father Christmas who is far more jolly that Briggs own grumpy creation.

‘The Snowman is astounded by the miracle of television, as at one time, long ago, we all were.’

The book though is still a seventies soft focus marvel. There is magic in the shimmering pencil crayon drawings, enhanced by the wordless action. Nicolette Jones, writing in her essential Briggs biog, Blooming Books says that the space and silence of this book was a direct reaction to the two years he had just spent ‘mired in the slime and wordiness of Fungus the Bogeyman. Raymond Briggs craved something pure, clean and wordless to work on.’

Asw ith many of his greatest books Briggs didn’t have to look far for inspiration. The garden in which the boy builds his snowman is his own – the same one we saw in Father Chrstmas. Like everything it’s an uncluttered version of reality, ’No stuff in the garden – seats, bird-feeders, bird baths, sheds etc. Saves work.’

Not that Briggs is a stranger to hard work – he often bemoans the fact that he got involved with the laborious business of creating strip cartoons. And interviews. ’Building a snowman takes hours. An interviewer once asked me if we could build a snowman together so I could be photographed with it. He said it would only take us 20 MINUTES!’

Despite its dreamlike quality there’s a ruthless logic to everything that happens in the book. Including flying snowmen, ’Fast running seems to turn into flying quite naturally. Snowmen are made of snow which floats down from the sky, so going up there again seems natural.’

This internal logic extends to the classic conclusion. The snowman melts. All things must pass. The final image, a single panel surrounded by white paper is still supremely powerful: The boy stands with his back to us staring at the remains of the snowman. The reader, looking the same way, is invited to stand in his shoes (or slippers) and face the hard reality of what comes to us all. 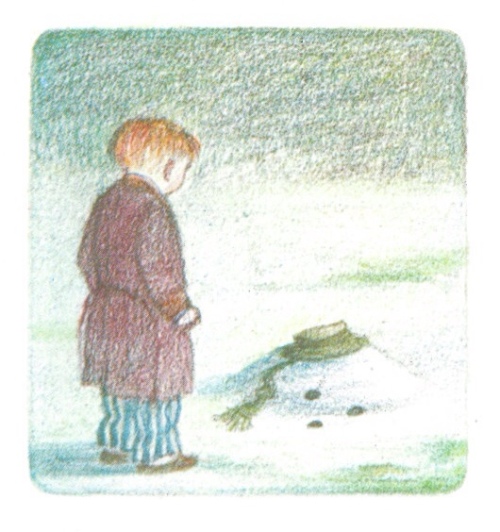 However Briggs isn’t happy with his most famous drawing. ‘I’ve only recently noticed, after 30 odd years, that the melted snowman almost makes a face – the three lumps of coal resemble eyes and a nose. I wish it wasn’t there.’

Good luck to everyone who bids on The Snowman and the many other brilliant books this evening, it’s for a fantastically worthy cause. If you hurry down to Sothebys today (Dec 8th) you can still catch an exhibition featuring The Snowman and books including The Tiger Who Came to Tea, Paddington and Charlie and the Chocolate Factory. Alternatively why not make your very own Snowman, courtesy of Bradford on Avon Mum?