The Church Mice series which began in the early 70s, reached the inevitable Christmas episode in 1980. It’s a bit like a made for TV adaptation of The Tailor of Gloucester starring Leonard Rossiter and the cast of Dad’s Army. Hard to think of something more of its era.

The mice are out to party, but as they have no jobs and no way of earning money they decide to raffle the ever patient church cat to raise funds. The only takers are a couple of suspicious shifters who cart poor Sampson away – ominously in a Tripe and Offal bag.

Further money raising schemes prove impractical due to the size of the little squeekers.

Which leads to a chain of events that brings Christmas shopping to a standstill. 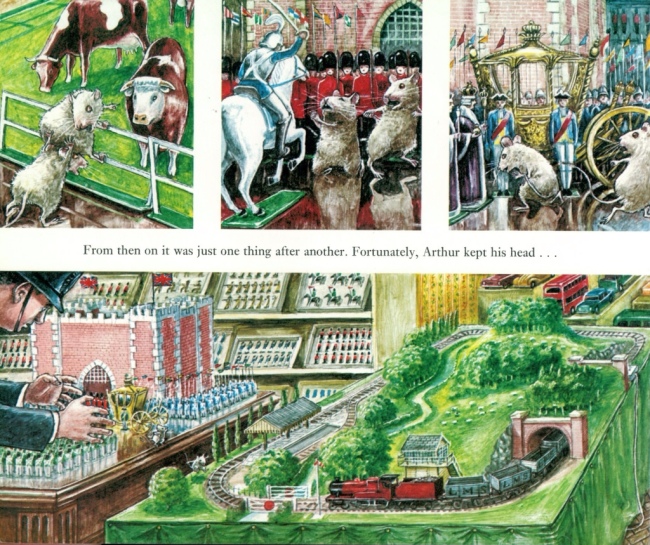 Penniless, the mice decide to use what they have – or at least what they can filch from the choir boys’ lockers to entertain themselves.

But a chance encounter with a false Santa leads to a delivery of enough food and goodies to make them ill for three days. 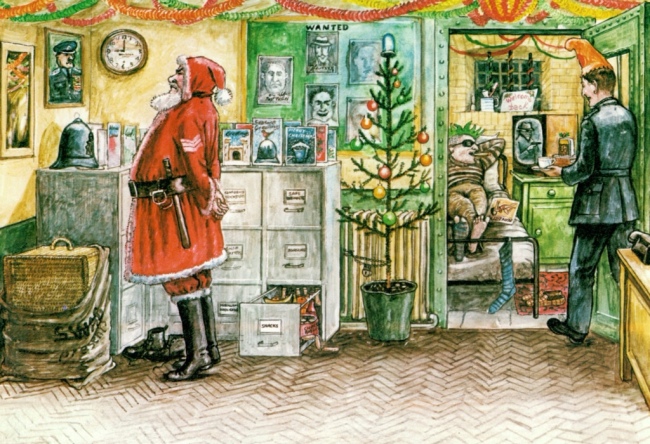 Graham Oakley’s naturalistic, painterly style might seem a little old fashioned these days – although there are some notable exceptions like the Greenaway winning Black Dog – but it suits its subject matter perfectly, the heavy dark colours adding suitable amounts of wintery atmosphere.

The Church Mice at Christmas is well worth returning to in 2014. It’s a period piece, but one that’s aged beautifully with a wealth of witty details and timeless visual gags to entrance readers of any age.

One thought on “Church Mice at Christmas by Graham Oakley”