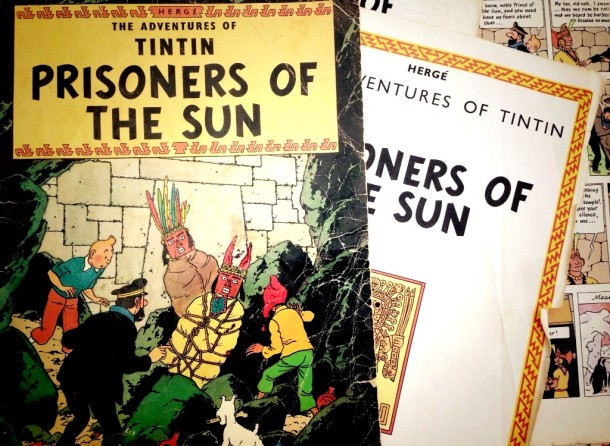 Every Wednesday morning my primary school class would take a walk through the mean streets of Westbury Park in Bristol. Opposite Waitrose and next door to a circular pub known to fans of the Young Ones as the Kebab and Calculator is a piece of sixties municipal architecture that means more to me than any other. Henleaze Library is an unprepossessing building cast in soft red brick and filled with the unmistakable smell of many thousands of laminated hardback books. 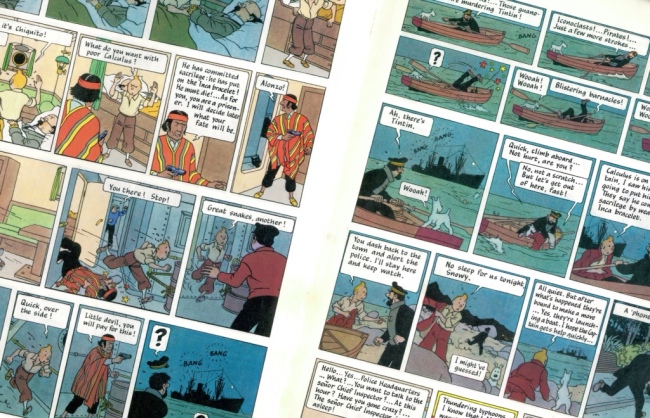 Once inside we were released into the children’s section, which covered nearly half of the space. There were long stacks of classics on the far wall and shelves laden with an exhaustive collection of contemporary children’s books. I knew the geography of the building as well as my home. And I can still remember the feeling of the sun warming my face as I kneeled under one of large picture windows looking through the Target Doctor Who novels. Still take in the view from the mezzanine down on the librarian’s desk where I’d watch the quietly mesmerising art of the rubber stamp ritual unfolding.

Most weeks I had only one destination in mind when we were unleashed – the several large crates of oversized picture books that sat in the middle of the rough carpeted children’s section. Laser guided I flicked past the assorted Raymond Briggs and Pat Hutchins until I found a clump of distinctive hardbacks that seemed more colourful and vivid than anything else in the building – The Adventures of Tintin. I developed an ability to recognise a favourite book from its spine or a small portion of the front cover. This seemingly useless skill that has proven remarkably useful over the years, taking me from children’s book obsessive to record collector and back again. The hunter gatherer instinct was strong in those days, honed to perfection in the face of stiff competition. It wasn’t ever going to feed my family, but at least we’d alway have plentiful words and pictures. 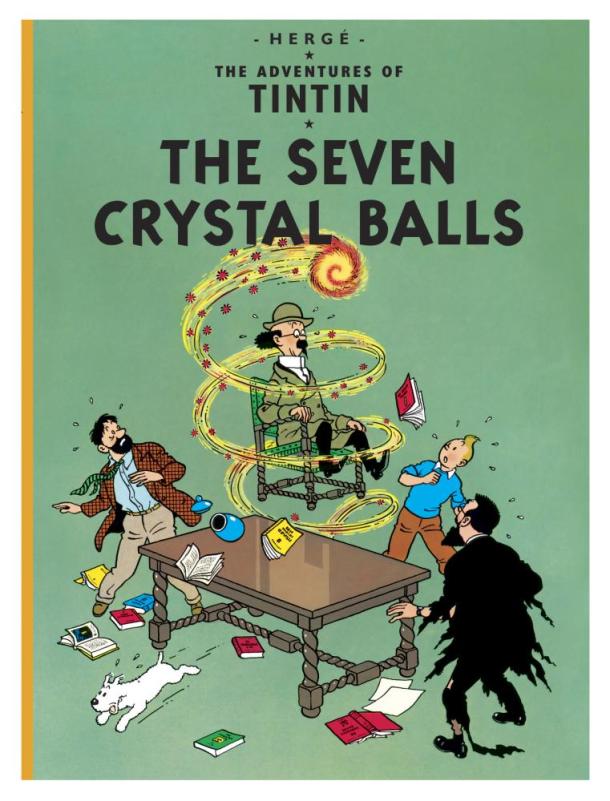 There was one Tintin book I sought out more than all others – a green covered book with a striking image of a seated Professor Calculus levitating above a table, his friends jumping back in alarm as he is engulfed in a small winding fireball. The Seven Crystal Balls was the first in a two part adventure that saw the reporter and his depressed sailor pal investigate the mysterious comatose state of a group of scientists, overcome by an Inca curse. It was an adventure that concluded in a book I had at home, the one that I read more than any other – Prisoners of the Sun. 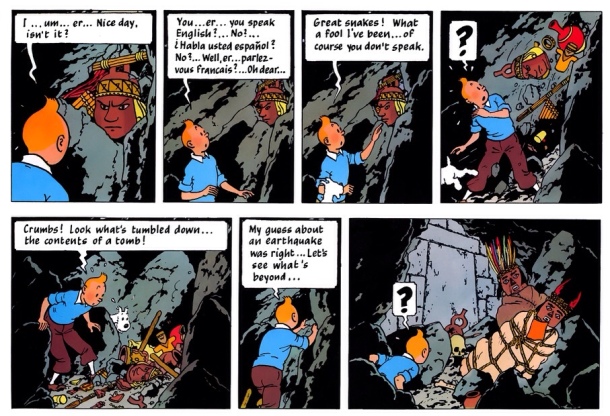 Reading it again today I can see exactly what attracted me to this particular story. It is in many ways the perfect Tintin adventure. Following the atmospheric mystery of Seven Crystal Balls, Tintin drags the increasingly eccentric Captain Haddock out of his recently acquired family home on a mission down the Amazon and up the Peruvian Andes, where he hopes to to lift the Inca’s curse. Where the first book ratcheted up the suspense, Prisoners of the Sun lets loose, with a string of tremendous action packed sequences and dramatic set pieces. 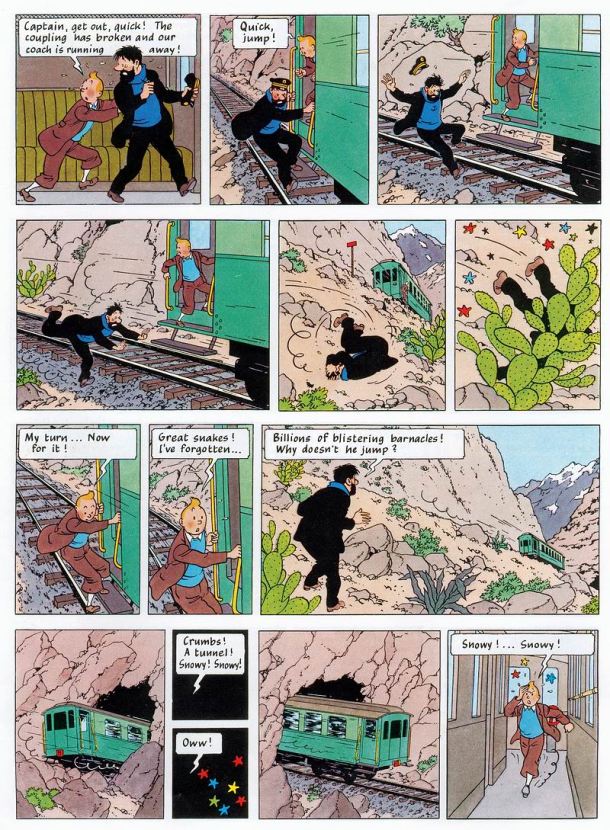 I still have total recall of the scene where the train carriage that is carrying Tintin high above the Andes is uncoupled from the engine and is left to freewheel into oblivion. As Haddock tumbles to safety Tintin returns to save Snowy who is snoozing on his seat. 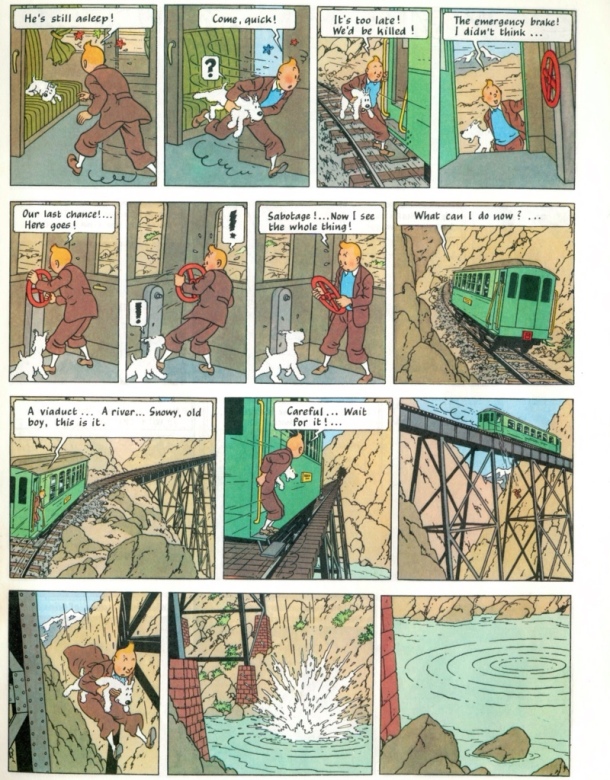 He attempts to engage the emergency brake but it snaps off in his hand, sabotaged. There’s a great filmic quality to this scene; the tension Hergé creates in just a few panels is the the equal of anything by Steven Spielberg – indeed more if you take his Tintin film as the benchmark of his ability in this area (which you shouldn’t).

Then there’s the arresting scene that still pulls me dangerously close to fast falling water. When Tintin, Haddock and their young companion Zorrino attempt to cross a precarious rope bridge it inevitably snaps, sending our hero plunging towards a watery grave. Instead he somehow uncovers a secret entrance to a network of caves hiding a tribe of Incas. The effect of this was as beguiling to me as any of the great fantasy portal stories I loved. Narnia never looked this good. 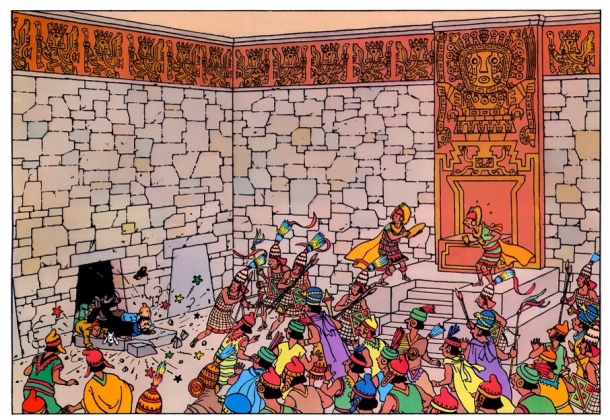 That Prisoners of the Sun is so perfectly formed, that this book exists at all, is something of a minor miracle. Hergé began the story in 1944, a time when Belgium had been occupied by the Nazis. He took the decision to remain in his job at the newspaper Soir, despite the fact that it was now under the control of the Germans. In Hergé’s view this wasn’t collusion, it was a decision born out of a pragmatic desire to keep his life and his country running, whatever the cost. When the allies liberated Belgium they didn’t see it quite this way: Hergé’s story and career were put on hold, perhaps forever. 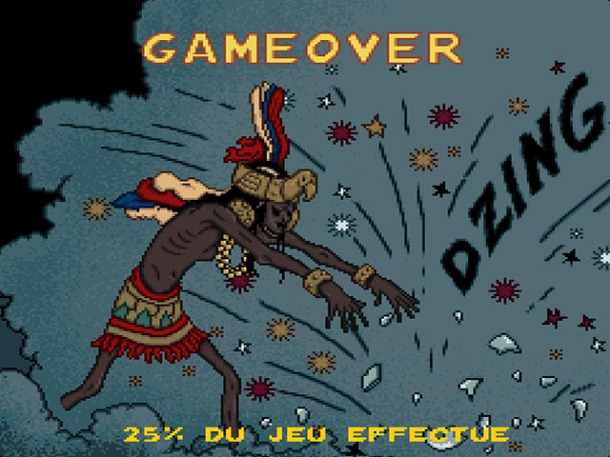 Dragged through the courts Hergé eventually spent several months in prison. But he didn’t forget about Tintin. Prevented from working he retired to his studio with partner Edgar P. Jacobs redesigning and colouring his back catalogue of stories ready for reissue as books. Jacobs is the forgotten hero of the Tintin story. He is credited with teaching Hergé how to use colour, he contributed drawings of the best stories and according to Frank Plowright even inspired Captain Haddock’s character with his ‘propensity for irascible outbursts’. You can see a great example of their work together in the theatre scene near the beginning of the Seven Crystal Balls. 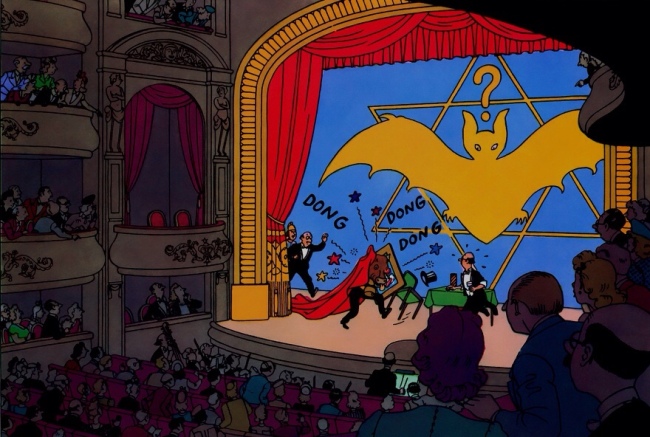 Hergé and Jacobs returned from exile in 1946, and continued where they’d left off. Though these opening frames make pointed reference to their enforced absence. Just look at Haddock’s fabulous brooding expression. 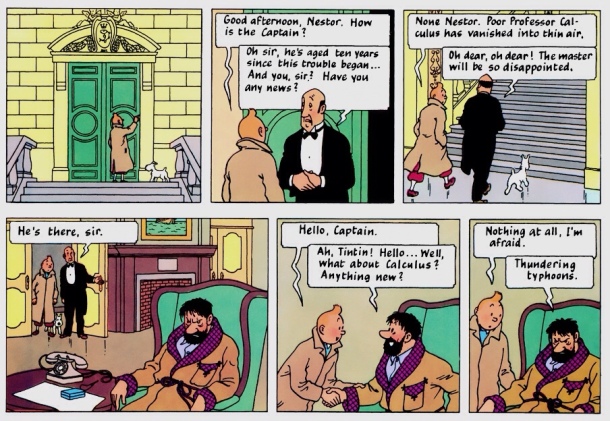 Working in full colour now, Jacobs helped his perfectionist friend meet tough deadlines, providing detailed backgrounds. But a demand to be credited as co-author was rejected. A shame – Hergé and Jacobs has a nice ring to it, and this great partnership might have helped Hergé get through his many periods of disillusionment with Tintin. But it wasn’t to be, instead Jacobs went on to concentrate on his own strip – the strikingly Tintin-esque Blake and Mortimer. 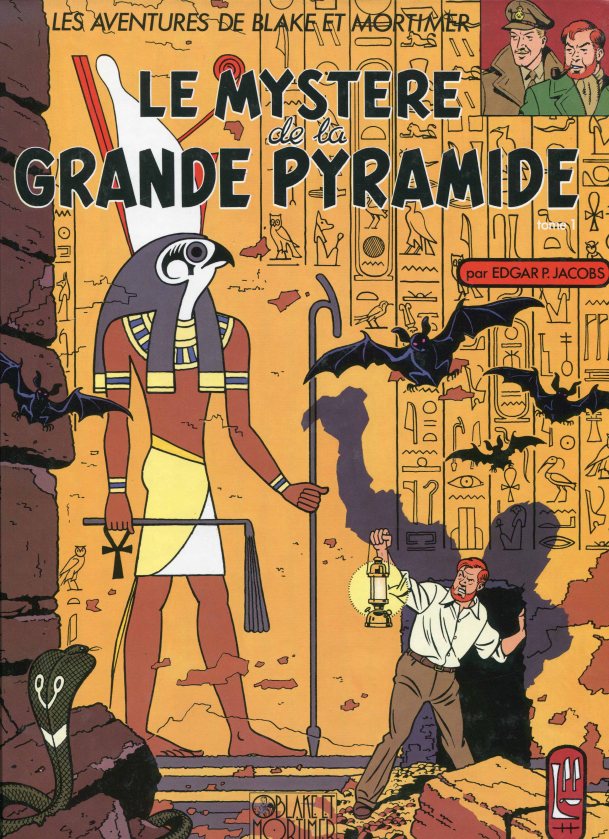 Prisoners of the Sun was further delayed by bouts of depression and Hergé finally completed the strip in 1948 – four years after it had begun. Returning to it now with the knowledge of his turbulent personal life I am surprised how little it affected his work. In fact Hergé went the other way, creating the most perfectly plotted, technically brilliant, funny and thrilling of all the Tintin books. Prisoners of the Sun was the perfect sequel, Hergé’s blockbuster masterpiece and I read it until it fell to pieces. 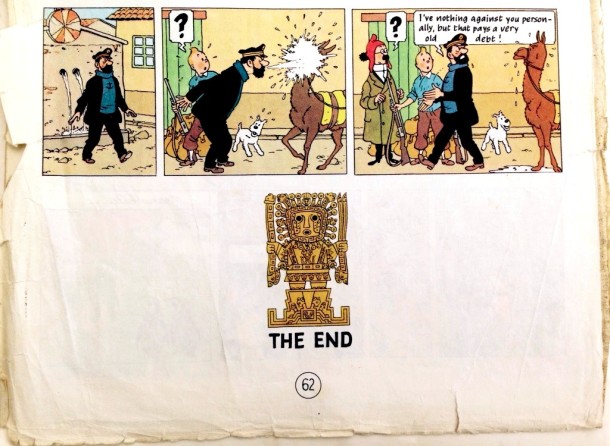