Based in New York at the turn of the twentieth century, The Gift of the Magi is an urban melodrama sprinkled with some of the magic of a Hans Christian Andersen fairy tale.

We meet Della, a young woman with just one dollar and eighty seven cents with which to buy her husband Jim something very special for Christmas. Della appears frail and waif like, but we soon discover that there’s steel in her determination to have the perfect Christmas.

Della has one thing of value – Rapunzel like hair, that is the envy of her tenement building. ‘Had the Queen if Sheba lived in the flat across the airshaft, Della would have let her hair hang out of the window some day to dry just to depreciate Her Majesty’s jewels and gifts.’

So Della takes herself off to the local wig maker where her locks are butchered for a rich woman’s head, all for the princessly sum of $20. With this she buys an elegant fob chain worthy of Jim’s one and only valuable possession, his pocket watch.

Della anxiously awaits her husband’s return, worrying at his reaction to her newly shorn head. ‘It’s sold, I tell you – sold and gone, too. It’s Christmas Eve boy. Be good to me, for it went for you. Maybe the hairs on my head were numbered… but nobody could ever count my love for you. Shall I put the chops on, Jim?’

The Gift of the Magi hangs on this sort of ironic detachment, having fun with Della’s personal melodrama. The gag is paid off in full as the bewildered Jim reveals his own present, for Della:  a set of beautiful jewel encrusted tortoiseshell combs, now completely useless. And where did he get the money for those you wonder?

A special mention for illustrator, Lisbeth Zwerger, whose work I’ve been wanting to feature for some time. Her delicately drawn figures are painted with equally exquisite muted colour washes. Zwerger brings a sense of space that suits the young couple’s sparse surroundings and also manages to convey the chill of the season. 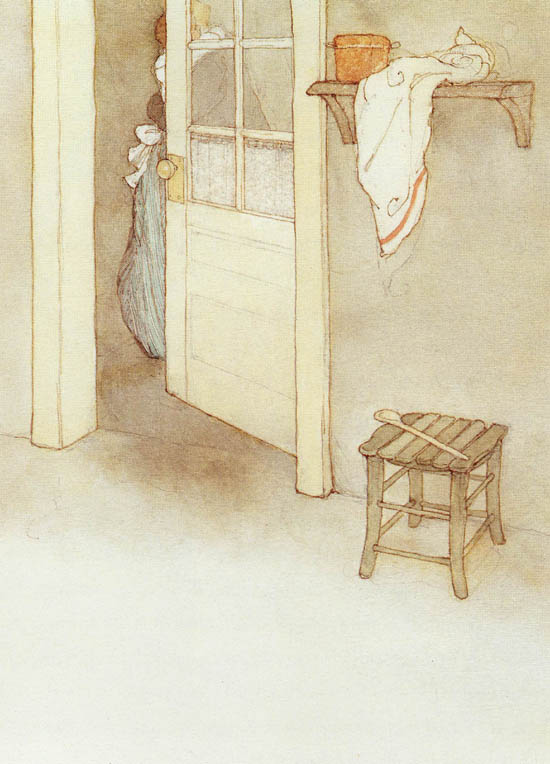