Arnold Lobel wrote his Frog and Toad books to help children learn to read but like Dr. Seuss before him Lobel achieved so much more. Through his characters, uptight Toad and optimistic Frog, he created one of the most tender and believable representations of friendship, and possibly the first same sex relationship in children’s literature. 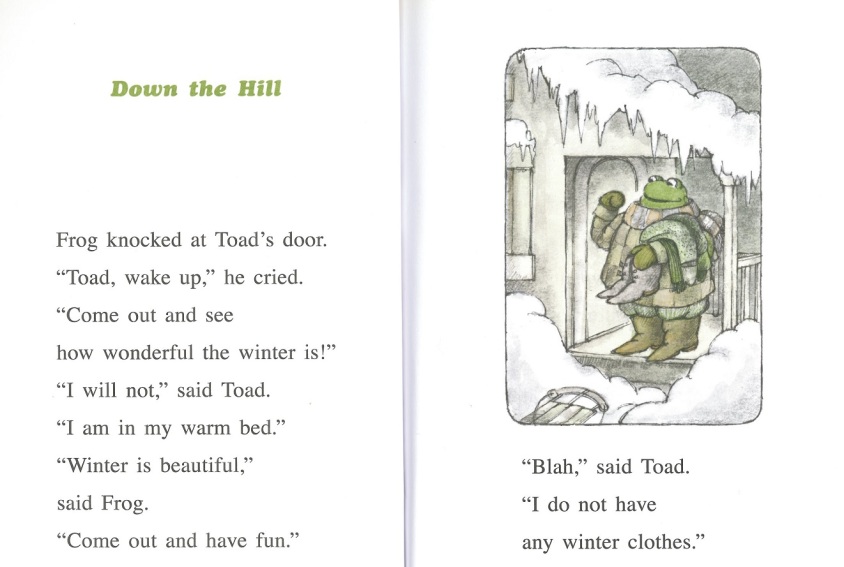 ‘Frog and Toad All Year’ follows the pair through the seasons, from Winter back through to Christmas. Lobel doesn’t worry too much about altering his colour scheme as the seasons changes though; in Frog and Toad’s world things always appear in green and brown.

‘Down the Hill’ sees the always ebullient Frog knocking on the door of his ultra reticent friend, and forcing him into hat, scarf and snow-pants before sending him hurtling down a snowy hillside.

‘Help!’ cried Toad. ‘My best friend is trying to kill me!’

The story is carried along by the same brilliant momentum as the sledge. At first Toad believes he is accompanied on his sleigh ride by Frog, giving him confidence and even allowing him to enjoy the ride. But a conversation with a passing bird puts him right on this, and suddenly all of Toad’s confidence flies out of the window.

His final exchange with Frog, will chime with any child who has ever been forced into doing something they didn’t want to.

‘Winter may be beautiful but bed is so much better.’ 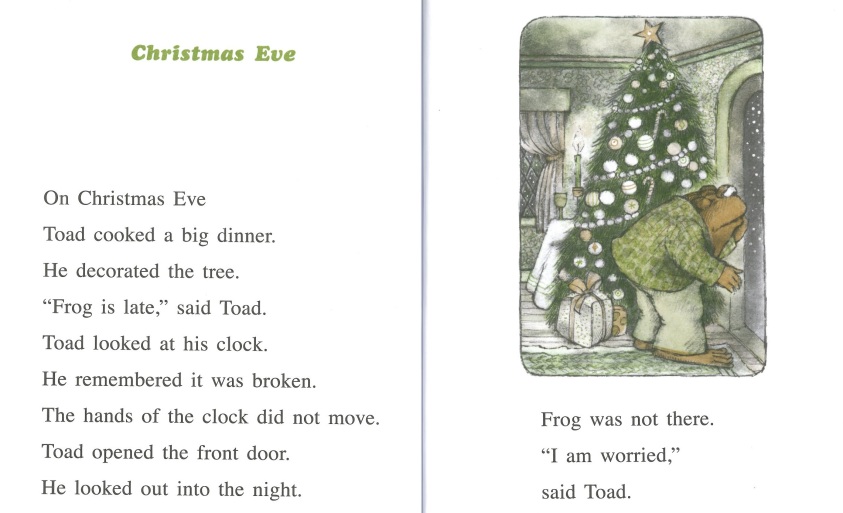 By the time Christmas comes around, Toad is in a fresh panic as Frog hasn’t turned up at his house, so obviously some dreadful fate must have befallen him. Armed with frying pan, rope and lantern he hurries into the cold to save his friend, only to run headlong into another hilarious moment of realisation.

Out of all the many, many Christmases shown in children’s literature, I think I’d like to be at Frog and Toad’s.

‘Two friends sat by the fire. The hands of the clock moved to show the hours of a merry Christmas Eve.‘

One thought on “Frog and Toad All Year by Arnold Lobel”