“It is winter in Narnia,” said Mr. Tumnus, “and has been for ever so long…. always winter, but never Christmas.”

I can now count the ways that C.S. Lewis laid traps for my younger self to become obsessed with his secret world. A portal hidden in an empty old house. Talking animals serving tea in cosy dwellings. But most of all an enchanted land of snow and ice where Christmas has been banished forever. That was really something worth fighting for. 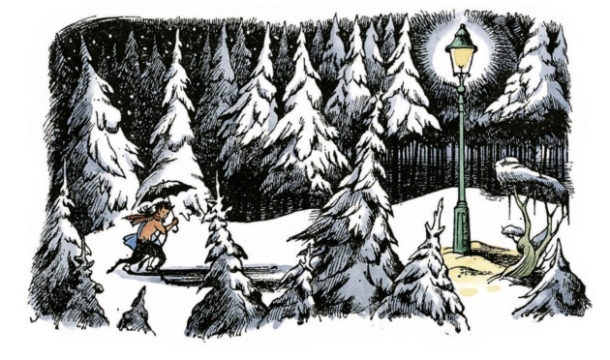 Children’s author Abi Elphinstone is a writer who has proved herself to be greatly adept at bringing the not so hidden magic of our landscape to life. The Lion the Witch and the Wardrobe cast a similar spell over her, and she has successfully bottled the spirit of Narnia into books like the Unmapped Chronicles and her magical, frozen adventure Sky Song. I asked her what it was about winter in Narnia that was so special.

“For me, the best winter stories are poised on the edge of miracles. There has to be a sense of longing and when the snow falls that longing is somehow brought closer.”

“Although I love that many winter stories boast sumptuous food, bulging stockings and brilliantly-decorated trees, I feel that the real wonder of these stories lies in the capacity for hope, the belief that as the snow falls it might bring magic with it, too.”

Some believed that Lewis spread his magic a little too widely. Not, as many have objected, because of his use of the Christ like Aslan, but in the introduction of a familiar red robed figure bearing gifts.

‘And on the sledge sat a person whom everyone knew the moment they set eyes on him. He was a huge man in a bright red robe (bright as holly-berries) with a hood that had fur inside it and a great white beard that fell like a foamy waterfall over his chest… Some of the pictures of Father Christmas in our world make him look only funny and jolly. But now that the children actually stood looking at him they didn’t find it quite like that. He was so big, and so glad, and so real, that they all became quite still. They felt very glad, but also solemn.’

C.S. Lewis’s friends, the authors J.R.R. Tolkien and Roger Lancelyn Green thought this was a bad idea. As committed folklorists they didn’t like the fact that he was mixing his mythologies. This blog suggests that Lewis was in fact using him, ‘as a clue, a pointer. Father Christmas acts as a sort of “John the Baptist” to identify Aslan as the Christ figure of Narnia.’ Possibly, though I can’t help think he was throwing everything at this his first children’s book to try and hook young readers.

For Abi Elphinstone it isn’t Father Christmas or even Aslan who is at the heart of The Lion, the Witch and the Wardrobe, but the character who stands in for the reader, Lucy Pevensie.

“The youngest of four siblings, Lucy’s heart is filled with longing. She wants to be believed by her brothers and sister and treated as their equal and it takes a world locked in the depths of winter and hidden behind a wardrobe to make her siblings understand.”

“I think it is Lucy’s ability to hope against the odds and against the cynicism of her siblings that makes this story so powerful. Without it, the way through to Aslan’s values – forgiveness, friendship, courage and compassion – might never have been found.”

It is the arrival of Father Christmas and Aslan that mark the end of the White Witch’s long, cold rule over Narnia and the return of Spring.  For Abi Elphinstone the ephemeral nature of snow and ice is what makes the world of the Lion the Witch and the Wardrobe so alluring.

“Perhaps it is because the snow won’t last forever – one day it will melt – and before it does you have a window, a short period of time where miracles might be possible after all.”

The Lion the Witch and the Wardrobe is published by HarperCollins. Abi Elphinstone’s books are published by Simon and Schuster.