The greatest children’s writers are often those with the best recall of their own childhoods. Few have better memories than Alison Uttley. The Country Child (1931) is an account of her early years growing up in rural Derbyshire. The amount of detail she packs in is extraordinary, not just in the descriptions of places and people; Uttley evokes all the senses, particularly in her vivid Christmas chapters. Even at a distance of 130 years she somehow reminds adult readers of the essence of their own childhood Christmases, making this a book to slowly savour.

‘At Christmas the wind ceased to moan. Snow lay thick on the fields and the woods cast blue shadows across it. The fir trees were like sparkling, gem-laden Christmas trees, the only ones Susan had ever seen. The orchard, with the lacy old boughs outlined with snow, was a grove of fairy trees. The woods were enchanted, exquisite, the trees were holy, and anything harmful had shrunken to a thin wisp and had retreated into the depths.’

Like Laura Ingalls Wilder’s The Little House in the Big Woods, another childhood memoir written in the 1930s, Uttley tells the story through the eyes of a fictionalised version of herself. Writing in the third person she allows the reader to witness these small marvels as if they are experiencing them.

‘Holly decked every picture and ornament. Sprays hung over the bacon and twisted round the hams and herb bunches. The clock carried a crown on his head, and every dish cover had a little sprig. Susan kept an eye on the lonely forgotten humble things, the jelly moulds and colanders and nutmeg graters, and made them happy with glossy leaves, everything seemed to speak, to ask for its morsel of greenery, and she tried to leave out nothing.’

Christmas morning brings with it a stocking, a rare moment of solitary communion and total pleasure spent in a cosy ‘box-like room’.

‘She pinched the stocking from the toe to the top, where her white suspender tapes were stitched. It was full of nice knobs and lumps, and a flat thing like a book stuck out of the top. She drew it out – it was a book, just what she wanted most. She sniffed at it, and liked the smell of the cardboard back with deep letters cut in it. She ran her fingers along like a blind man and could not read the title, but there were three words in it.’

‘Next came an apple, with its sweet, sharp odour. She recognised it, a yellow one, from the apple chamber, and from her favourite tree. She took a bite with her strong, white little teeth and scrunched it in the dark. It was delicious fun, all alone, in this box-like room.’

One tradition that has sadly vanished is the arrival of the postman, bringing cards on Christmas morning and providing an early opportunity for regifting.

‘The postman came through the wood with a bundle of letters and Christmas cards. He stood by the fire and had a cup of tea, and admired the decorations whilst Margaret opened her letters with cries of happiness, and excitement. She didn’t stop to read them, she took out all the cards which had no names on them and popped them into envelopes. Then she readdressed them, dextrously reshuffling and redealing, so that the postman should take them with him, a thrifty procedure.’

The farm provides everything needed to sustain the family, including the novelty of a pine tree, dragged from the ground for Christmas day.

‘In the middle of the table was a Christmas tree, alive and growing, looking very much surprised at itself, for had not Tom dug it up from the plantation whilst they were at church, and brought it in with real snow on its branches? The rosiest of apples and the nicest yellow oranges were strung to its bought, and some sugar biscuits with pink icing and a few humbugs from Tom’s pocket lay on the snow, with a couple of gaily covered texts and a sugar elephant. On the top of the tree shone a silver bird, a most astonishing silver glass peacock with a tail of fine feathers, which might have flown in at the window, he wouldn’t say Nay and he wouldn’t say Yea. Susan was amazed. If an angel from heaven had sat on the table she would have been less surprised.’

Buy The Country Child from my Bookshop.org affiliate page and help local independent bookshops (and this blog)

One thought on “The Country Child by Alison Uttley” 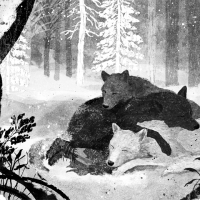