As the literary world awaits the Book of Dust, the much anticipated prequel to Philip Pullman’s His Dark Materials, the Comic Book Club this month looks to the return of one of his less well known characters, John Blake. 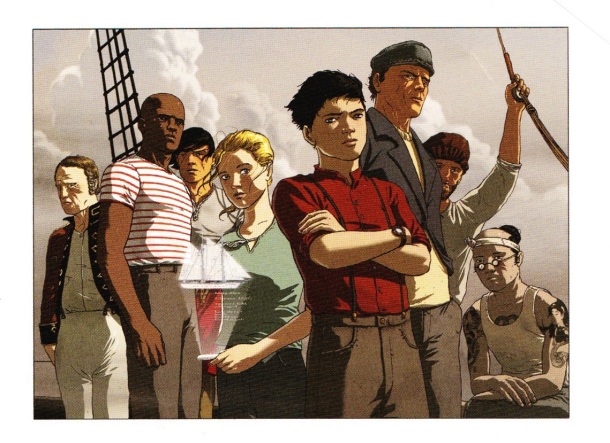 Serialised over the last year in the Phoenix comic, the Adventures of John Blake follows the time slipping crew of the ghost ship, Mary Alice as they search for a way back to their own eras. Along the way they pick up a drowning Australian girl, and face up to an evil tech super villain with the help of a PG rated James Bond type character. More than any book we’ve looked at over the last couple of years, John Blake divided the club’s opinion.

Although it was my choice, I was slightly trepidatious. I love the comic book adaptation of Pullman’s Northern Lights, but am not hugely enthusiastic about the Phoenix. The ‘Waitrose Comic’, has some fun strips like Bunny Vs Monkey, but leans rather too heavily on serialised stories which wouldn’t have felt particularly out of place in a boy’s comic from the pre-2000AD era. On first sight John Blake is firmly in the latter camp.

The Phoenix with its subtitle ‘the story comic’ is, I suspect bought largely by parents who don’t really like the idea of comics, and would rather their children were reading ‘proper’ children’s books. So a serial written by the Pope of proper children’s books is a dream commission. In John Blake we have a story that channels the comics that Pullman read in his youth, like the Eagle combined with the narrative punch of the American comics he also loves, but packaged in a way that looks like a nicely bound hardback book. The whole thing screams ‘quality product’, but do the contents match up? 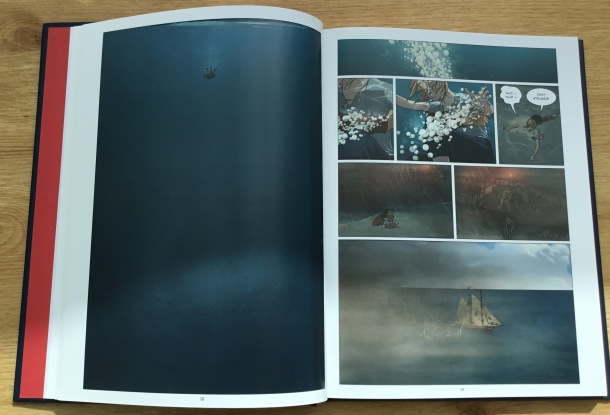 For the most part I thought they did. ‘Mystery of the Ghost Ship’ worked well as an origins story, and I enjoyed the globe trotting, time travelling action packed plot. Fred Fordham’s art, although a little technical for my tastes was also very handsome, particularly when detailing places and things.

The central concept of a time travelling ship also tickled my fancy. Without warning the Mary Alice slips through time, but the unchanging nature of the sea left the crew often unaware that it has even happened.

This was a good introduction to John Blake, an intriguing character. I hope we’ll see a greater focus on him and his underdeveloped ship-mates in any future stories. 4***** 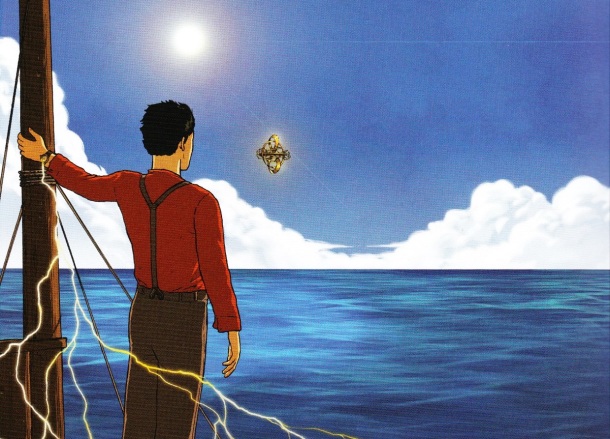 Dan can usually be relied on to dislike my choices in unforgiving new ways, and he didn’t disappoint here. Alarm bells were raised when he arrived with a copy sans dust jacket. ‘It ripped when I opened it.’ Dan hates dust jackets, and he hated the design of the mysterious artefact / gizmo that lay underneath. ‘A timey wimey thing that looked like it had been designed by a sixth former.’ 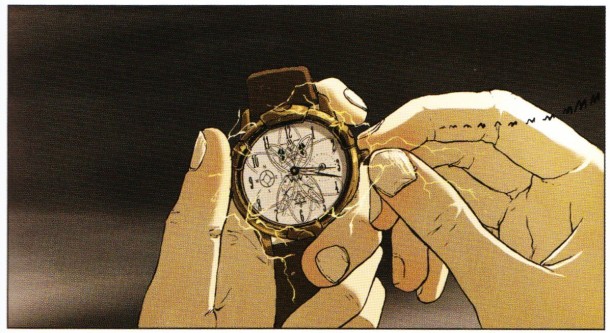 In fact the story was overflowing with McGuffins. Along with the object on the cover, there’s a time travelly watch thing and also a frisbee shaped piece of i-tech that plays the music of Nirvana (although seemingly performed by a different band) and doubles as a useful weapon. We know Pullman can do good McGuffin (see Lyra’s alethiometer or Will’s knife in His Dark Materials), but perhaps he needs to reign himself in a little here.

Most damning Dan found this story NO FUN. And I think this was the crux of it, as a children’s book he wanted to feel that spark of excitement, he had with the stories he loved as a child, ‘Goonies’ or ‘Flight of the Navigation’. Philip Pullman is perhaps not your go to guy for a feel-good 80s nostalgia fest.

Overall Dan found it cold with no passion. Suitably for a comic you buy in Waitrose ‘this manufactured bleurgh might as well come with a bag of rocket.’ 1* 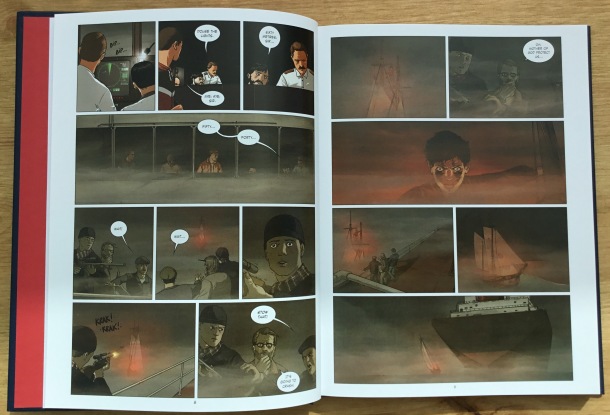 Kelvin was similarly underwhelmed, and built on some of Dan’s criticisms. He was intrigued by the opening scene, which built like a film as the ghost ship emerged from the fog and offered a real sense of mystery. We then cut to the offices of the ‘International Marine Organization, San Francisco’, and Kelv put the book down for several weeks. These were just two pages, but they were thunderously dull. It is here that we are introduced to a character called Danielle, presumably a marine biologist, though none of us could remember, so superfluous was she to the plot.

For Kelvin the story missed the lightness of Tintin, and as a straight boys own adventure it was far too dull, with fight sequences that felt light and unreal. Kelv couldn’t suspend disbelief at the incompetence of the professional killers, matched against a couple of kids armed with well aimed pineapple. 2**

Tom was a little more forgiving, and remembers having enjoyed very similar books growing up (he mentioned the Race Against Time series). But he did query whether Pullman had actually told the right story. It’s billed as ‘the Mystery of the Ghost Ship’, but we learn little about the Mary Alice. He wanted to see more from the ship and her crew, who were plucked from different moments in history, including a Roman engineer, a Devon slave and a Chinese silk trader.

I mentioned how the story had been adapted from a screenplay written by Pullman, and Tom perceptively queried how much involvement the author had on this comic book adaptation. It felt as though it needed a fair bit more work to function as a successful comic and read a little like a storyboard. Perhaps artist Fred Fordham, or someone else at the Phoenix had done the adaptation. Tom liked Fordhams’ art and though his small billing at the bottom of the front cover was a little ungenerous. 3***

There might not be a movie of this story but this isn’t the only John Blake story out there. The character appeared in the forerunner of the Phoenix, the DFC, a copy of which I managed to track down before the club. The positive reaction that the art in this earlier version provoked was telling. 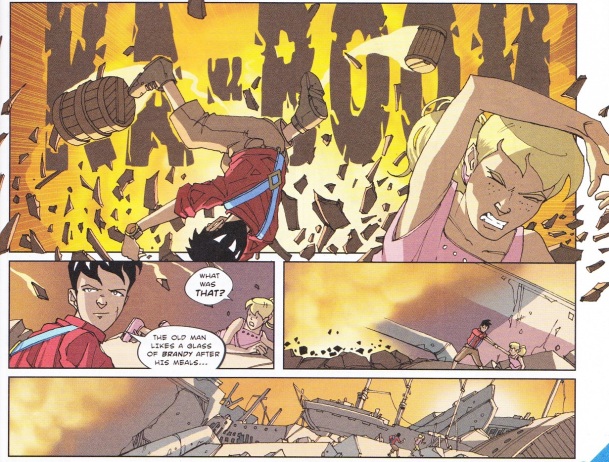 John Aggs’ Manga inspired style is very different from the realistic European ‘Ligne Claire’ of Fordham’s version. It feels more modern, and on the strength of this single issue, quite possibly a lot a bit more FUN. Sadly there is no collected edition available, so we will never know.

The Adevenures of John Blake is published by David Fickling Books. Read more from the Comic Book Club here.