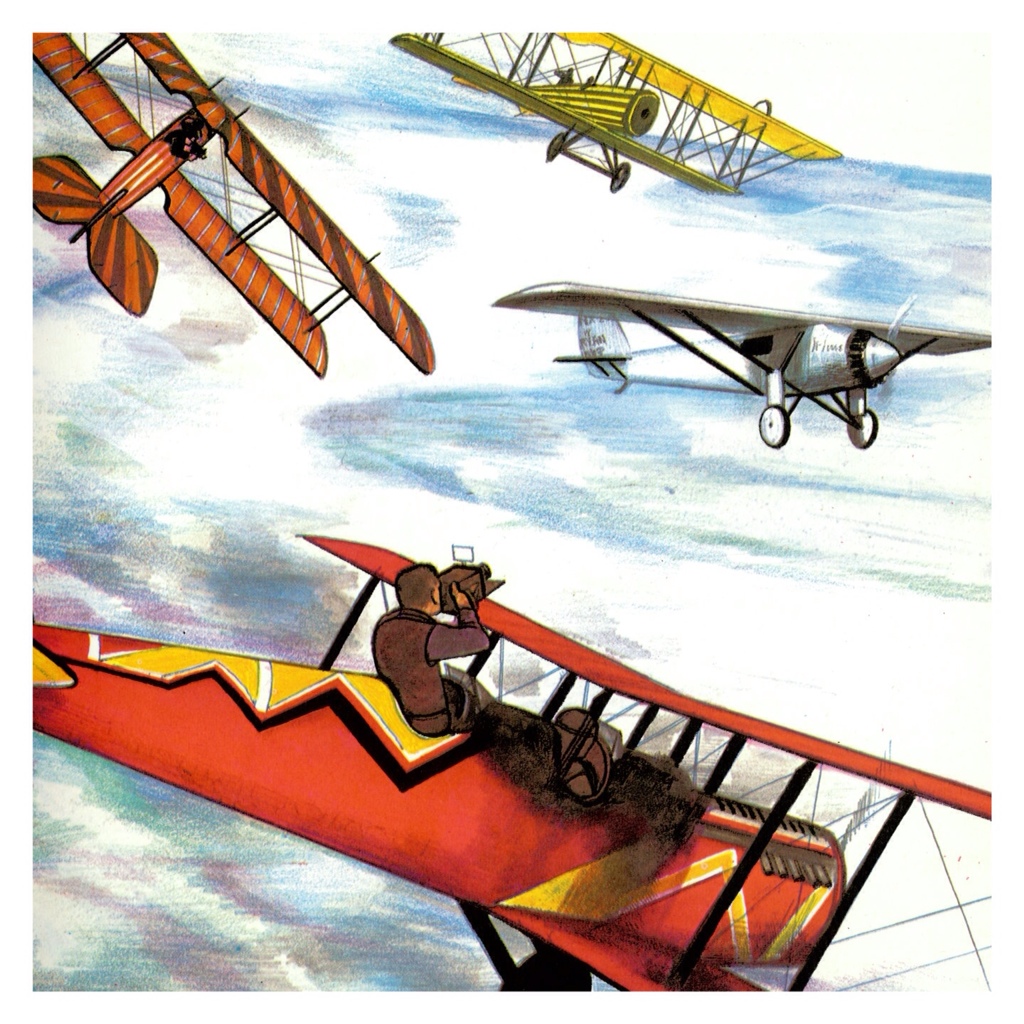 Here’s a little curio from Raymond Briggs: ‘The True Account Of Great Events In Human Achievement‘ series, six non fiction titles covering the crowning achievements of some great (and not so great) figures from the 20th Century.

In 1968, fresh from winning the Kate Greenaway Medal for the Mother Goose Treasury, Briggs’s editor Richard Hough took the opportunity of his raised profile to push a long cherished project aimed at boys. As it says in the blurb these are

‘True accounts of outstanding and stirring achievements by men of courage in a wide range of activities, from car racing to mountaineering, flying to sailing.‘

The two racing car titles were asking a lot from someone who preferred fairy tales to ‘drawing boring modern things like cars.’ But he still managed to create depictions of motorised transport that are full of energy and ‘owe something to the Italian Futurists‘ as Nicolette Jones observes in her biography, Blooming Books. And just look at the outlandish flourish of a swirling vapour trail left by Charles Lindbergh’s plane as he sores over city lights.

Even when he’s dealing with technology there are some classic Briggs touches to be found. He offers the specifications of Charles Lindbergh’s record breaking plane, the Spirit of St. Louis, with all the necessary information: Periscope, adjustable stabiliser, earth inductor compass, five ham sandwiches. He’ll want to stop off and have lunch with Father Christmas no doubt.

There are other hints of things still to come elsewhere in the book. As Lindbergh nears the end of his 3600 mile journey from New York to Paris he circles the Eiffel tower. The plane is shown in the distance, all in white, with wings reaching outwards. It’s hard not to think of the iconic flying sequence in The Snowman.

In First Up Everest it’s not Edmund Hillary and Tenzing Norgay who are the stars, but the great mountain and snow streaked sky. Great swathes of the book are given over to beautiful wind blasted panoramas, and set against them the climbers in their goggles and oxygen masks look truly vulnerable .

There is one title Briggs wasn’t entirely happy about and which seems an odd choice for a British series on heroic adventurers: Richtofen the Red Baron tells the story of the First World War German fighter pilot who Briggs describes in Blooming Books as ‘a killing machine.’ Nicolette Jones explains that ‘this was not comfortable territory for the artist who went on to take an anti-war stand in When the Wind Blows and the Tin Pot Foreign General and the Old Iron Woman.’

The Great Achievements series seem like an interesting diversion, but they were intended to cement Raymond Briggs’s arrival as a major name in children’s books. On the front cover it is Briggs who gets top billing – unusual even today. And inside it’s clear that they are a showcase for his work, with the text often secondary to great double page spreads.

At their best these books capture the thrill of some genuinely extraordinary moments in 20th century history. The Lindbergh book especially, with text by Nicholas Fisk, who went on to write classics including Grinny and Trillions, brings this 85 year old adventure back to life and brilliantly complement the energy of Briggs’s art.

First Up Everest and Lindbergh the Lone Flyer are long out of print but are available to buy from the tygertale Etsy Shop.